Professor Chunggi Baig's research team is posing for a group photo in their lab at UNIST. From left are Soowon Cho, Jun Mo Kim, and Sohdam Jeong.

Their findings published in the recent issue of the Journal of Rheology.

A team of researchers, affiliated with UNIST has discovered the fundamental principles of handling polymers, which constitute the basis of man-made materials, such as plastics, paints, and even consmatics.

In this work, Professor Chunggi Baig of Energy and Chemical Engineering and his team presented, for the first time, the detailed molecular mechanisms and dynamics underlying slip phenomena, which have yet to be established in interfacial polymer rheology.

They presented the intrinsic molecular characteristics of the slip phenomena by using atomistic nonequilibrium molecular dynamics simulations of polyethylene melts under shear flow. Polymer melts are polymers with an overall number average molecular weight of 10,000 in the liquid-like melt state without solvent.

This interfacial slip phenomena, which occurs at the interface with other objects, has been pointed out as the major cause of melt instability, which degrades the quality of plastics. Therefore, in a system that has interface, such as biomembranes and polymer thin films, the interfacial slip phenomena is definitely one of the most important variables for determining the properties of polymeric materials.

Therefore, in-depth information of molecular mechanisms and dynamics behind, such interfacial properties is essential for producing high-quality plastics, as well as for predicting and controling intriguing behaviors of various confined systems.

“One example of this interfacial slip phenomenon is when the polymer melts slip at the mold boundary and causes surface roughness or cracking,” says Sohdam Jeong of Energy and Chemical Engineering at UNIST, the first author of the study. “Through this study, I wanted to solve the fundamental principles of this slip phenomena on a molecular level.” 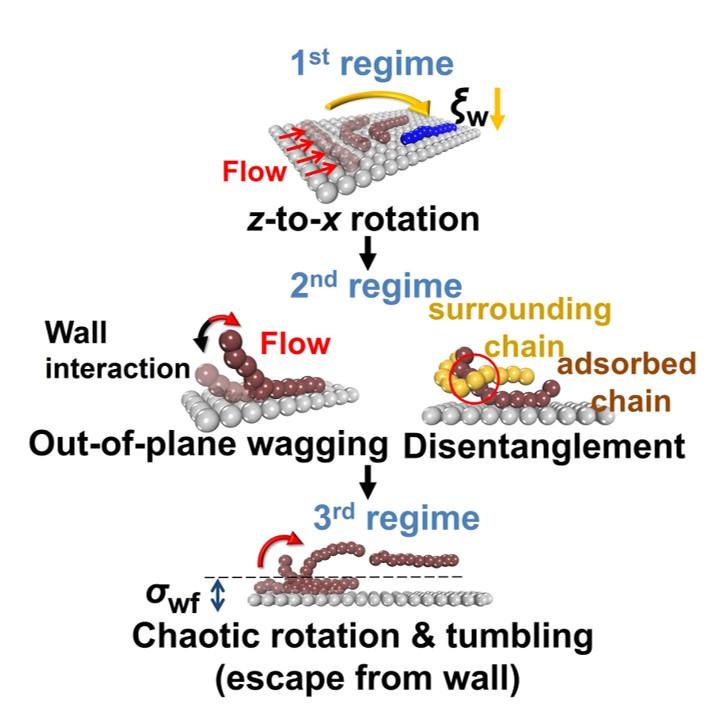 The schematic description of the main molecular mechanisms and dynamics directly related with the interfacial slip for each of the three regimes.

In their efforts to reveal the molecular origins underlying the interfacial slip, the research team analyzed the slip phenomena in detail, with respect to molecular mechanisms and dynamics of interfacial chains and their rheological characteristics by directly tracking down the individual chain motion near the interface.

In the study, the research team identified three distinctive characteristic regimes with regard to the degree of slip at the interface and revealed the underlying molecular mechanisms for each regime: (i) the z-to-x chain rotation mechanism in the vorticity plane in the weak flow regime, which effectively diminishes the wall friction against chain movement along the flow direction, (ii) the repetitive chain detachment-attachment (out-of-plane wagging) and disentanglement mechanism in the intermediate regime, and (iii) irregular (chaotic) chain rotation and tumbling mechanisms in the strong flow regime.

“Depending on the types of polymeric materials and the boundary structure of the interface, the interface slip might be slightly different,” says Sohdam.

“The findings of this study help us comprehend the fundamental characteristics of the interfacial slip, and understand various rheological phenomena and properties exhibited by interfacial polymeric systems,” says Professor Baig.

This work has been supported by the National Research Foundation of Korea (NRF) and the results of the study have been appeared in the February issue of the prestigious Journal of Rheology, a vital resource for researchers working in fields as diverse as polymer physics and fluid mechanics.