Professor Hyun-Wook Lee in the School of Energy and Chemical Engineering at UNIST, talking about the benefits of the real-time observation of the charge-discharge cycling of Li-ion batteries.

Their findings appeared in the July 27th issue of the prestigious journal, JACS.

Lithium-sulfur (Li-S) batteries, which employ sulfur as cathode and metallic lithium as anode materials, have been widely nominated as one of the most promising next-generation electrochemical storage systems due to its low cost and high theoretical capacity. However, dissolution of its lithiated product (lithium polysulfides) into the electrolyte limits the practical application of lithium sulfur batteries, eventually resulting in poor cycle performance and other drawbacks, such as rapid capacity fading.

A recent study, affiliated with UNIST has made a surprising discovery that could fix this problem. In the study, published in the July 27th issue of the Journal of the American Chemical Society (JACS), the research team demonstrated that sulfur particles can be hermetically encapsulated by leveraging on the unique properties of two-dimensional materials, such as molybdenum disulfide (MoS₂). This breakthrough has been led by Professor Hyun-Wook Lee in the School of Energy and Chemical Engineering at UNIST in collaboration with a research team, based in Singapore. 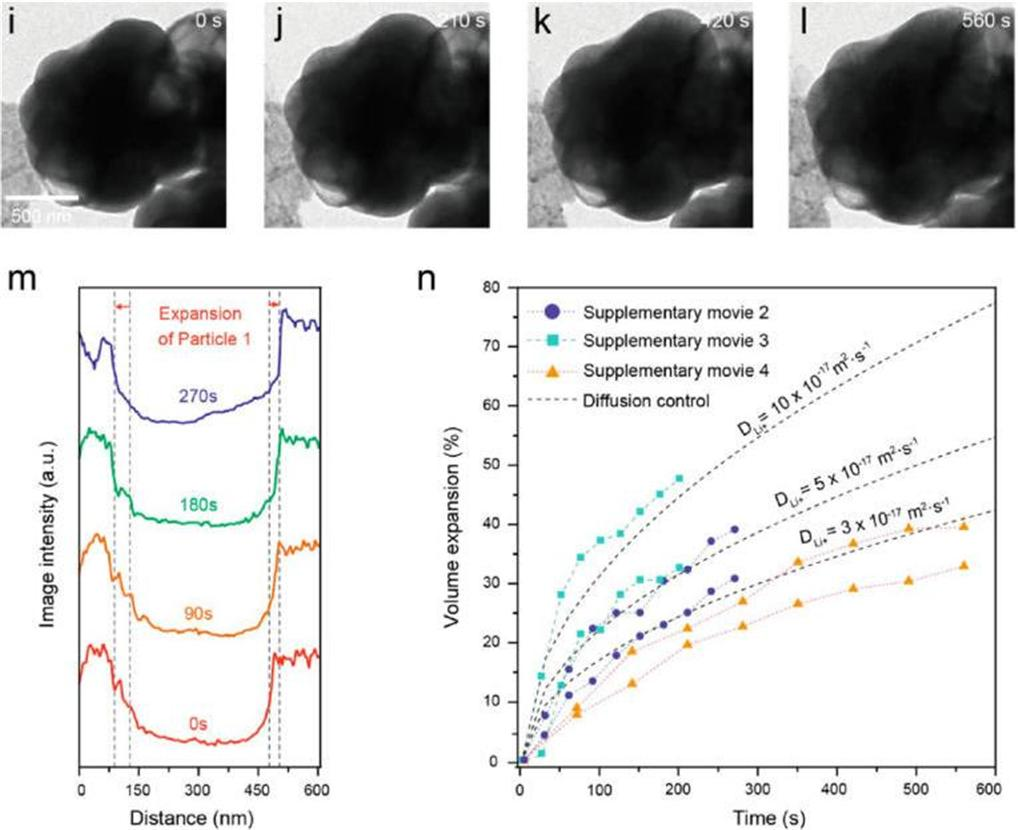 Shown above are lithium diffusion coefficient in MoS2-encapsulated hollow sulfur spheres based on in situ TEM study.

The MoS₂coating helps prevent the leakage and sublimation of sulfur under high vacuum environment, but there has been little in situ transmission electron microscopy (TEM) observation and understanding of this new material within the batteries in Singapore. To evaluate the volume expansion of MoS2-encapsulated hollow sulfur spheres, Professor Lee and his team carried out in situ TEM study of the sulfur lithiation process in the study.

Transmission electron microscopy (TEM) is an imaging technique that permits direct investigation of the intimate structural details of a wide variety of nanomaterials, especially carbon based nanomaterials, including graphene. They are costly, large, cumbersome instruments that require a significant amount of training and specialized skill. This hinders the real-time in situ observation of the charge-discharge cycle of Li-S batteries. 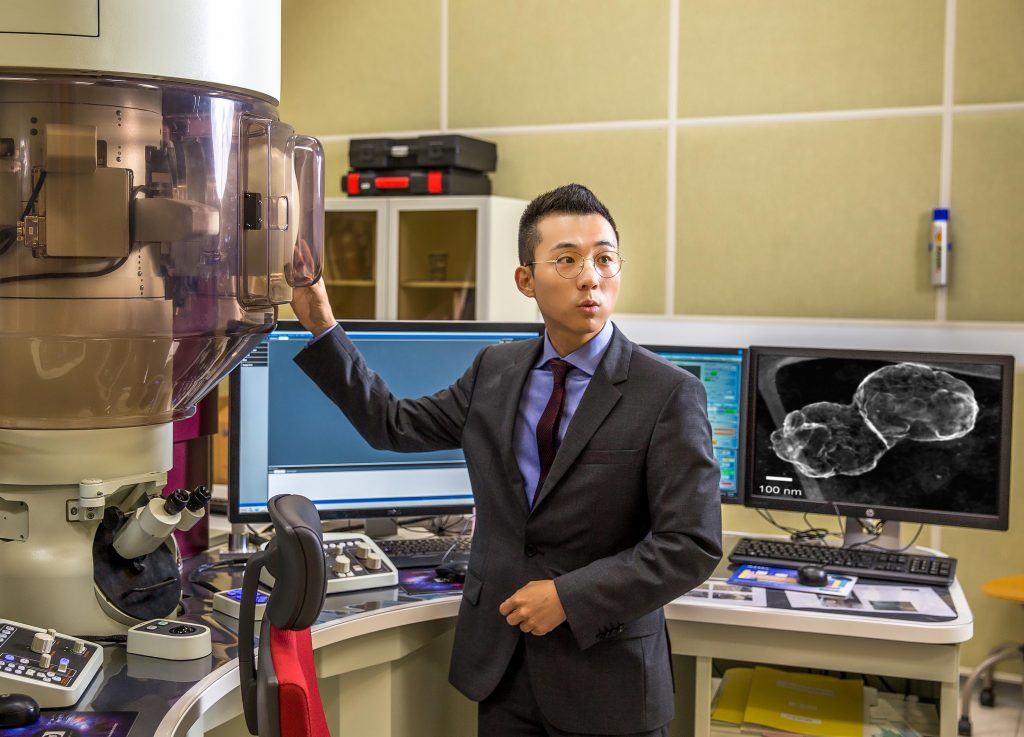 Professor Lee and the TEM machine, located at the UNIST-JEOL TEM Center for Lithium Battery Analysis at UNIST.

Professor Lee became an expert in this field after the first exposure to TEM during his time at KAIST. At Stanford University, as a postdoctoral fellow, he worked night and day, wrestling with TEM. Those experiences have enabled him to successfully work with and meet demands of lithium-ion battery market for building better batteries.

“TEM is an impressively powerful microscopic tool that exists today, capable of producing high-resolution, detailed images one nanometer in size,” says Professor Lee. “My experience in dealing with TEM at both KAIST and Stanford University have guided and nourished me to become an in situ TEM expert.”

In 2016, Professor Hyun-Wook Lee joined the faculty of UNIST as an Assistant Professor in the School of Energy and Chemical Engineering with research and teaching focus on better materials for electrochemical energy storage and in situ transmission electron microscopy studies on battery electrodes. Professor Lee received his B.S. in Advanced Materials Engineering from Sejong University in 2007. He received his Masters of Science and Ph. D. in Materials Science and Engineering from Korea Advanced Institute of Science and Technology (KAIST) in 2009 and 2012. Prior to joining UNIST, he was a Postdoctoral Research fellow at Stanford Unviersity, California, United States from 2012 to 2015. His research interests include rechargeable batteries, synthesis of nanosized materials, and in situ/operando TEM studies.