Shown on left is an image of a rechargable battery that can be charged anywhere there is light. From left are Keun-Ho Choi, Professor Sang-Young Lee, Professor Kwanyong Seo, and Inchan Hwang.

A team of researchers, affiliated with UNIST has developed a single-unit, photo-rechargeable portable power source based on high-efficiency silicon solar cells and lithium-ion batteries (LIBs).

This newly-developed power source is designed to work under sunlight and indoor lighting, allowing users to power their portable electronics anywhere with access to light. In addition, the new device could power electric devices even in the absence of light.

In this work, the team of Professor Sang-Young Lee and Professor Kwanyoung Seo of Energy and Chemical Engineering at UNIST presented a new class of monolithically integrated, portable PV–battery systems (denoted as ‘SiPV–LIBs’) based on miniaturized crystalline Si photovoltaics (c-Si PVs) and printed solid-state lithium-ion batteries (LIBs). The device uses a thin-film printing technique, in which the solid-state LIB is directly printed on the high-efficiency c-Si PV module. 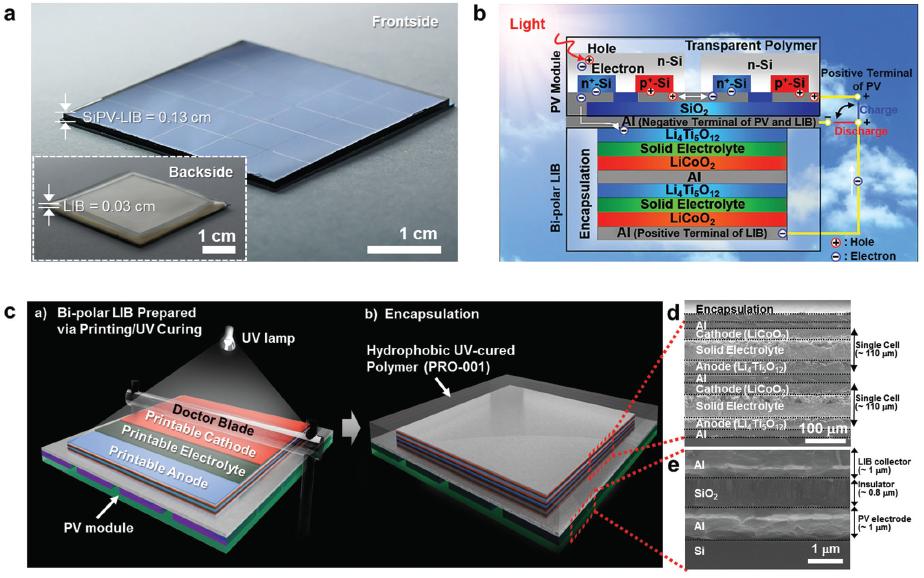 Schematic representation of the monolithically integrated SiPV–LIB device and the electrochemical performance of the bipolar LIB.

“This device provides a solution to fix both the energy density problem of batteries and the energy storage concerns of solar cells,” says Professor Lee. “More importantly, batteries have relatively high power and energy densities under direct sunlight, which demonstrates its potential application as a solar-driven infinite energy conversion/storage system for use in electric vehicles and portable electronics.”

According to the research team, this single-unit PV–LIB device exhibits exceptional photo-electrochemical performance and design compactness that lie far beyond those achievable by conventional PVs or LIBs alone. It also displays unprecedented improvements in photo-charging (rapid charging in less than 2 min with a photo-electric conversion/storage efficiency of 7.61%).

In the study, the research team fabricated a solid-state LIB with a bipolar cell configuration directly on the aluminium (Al) electrode of a c-Si PV module through an in-series printing process. To enable the seamless architectural/electrical connection of the two different energy systems, the Al metal layer is simultaneously used as a current collector of the LIB, as well as an electrode for solar cells. This allows the battery to be charged without the loss of energy.

In the study, Professor Lee and his research team connected the device to various portable electronics to explore its practical use. They fabricated a monolithically integrated smartcard by inserting the SiPV–LIB device into a pre-cut credit card. Then, electric circuits were drawn on the back of the credit card using a commercial Ag pen to connect the SiPV–LIB device with an LED lamp. The SiPV–LIB device was also electrically connected with a smartphone or MP3 player and its potential application as a supplementary portable power source was explored under sunlight illumination.

The SiPV–LIB device was fully charged under sunlight illumination after only 2 min and also even at a dimly-lit living room. The image on the right shows the operation of the SiPV–LIB-embedded smartcard.

The SiPV–LIB device was capable of fully charging under sunlight illumination after only 2 min. It also showed decent photo-rechargeable electric energy storage behaviour even at a high temperature of 60°C and even at an extremely low light intensity of 8 mWcm-2, which corresponds to the intensity in a dimly-lit living room.

“The SiPV–LIB device presented herein shows great potential as a photo-rechargeable mobile power source that will play a pivotal role in the future era of ubiquitous electronics,” says Professor Lee.

The results of the study will be featured on the front cover of the April 2017 issue of the world-renowned journal Energy & Environmental Science (EES). This work has been supported by the Basic Research Program and the Wearable Platform Materials Technology Center through the National Research Foundation of Korea (NRF) funded by the Ministry of Science, ICT & Future Planning (MSIP). It was also supported by the Development Program of the Korea Institute of Energy Research (KIER).