Their findings have been published in the November 2021 issue of the Proceedings of the National Academy of Sciences (PNAS).

A recent study, affiliated with UNIST has unveiled a new gene and molecular pathway that regulate the excitability of neural pacemaker cells in the brain. The researchers expect that understanding how this pathway works can offer insights into behavioral rhythms in daily human life and lead to new treatments for clock-related human diseases, such as depression and insomnia.

Published in the November 2021 issue of the Proceedings of the National Academy of Sciences (PNAS), this breakthrough has been jointly carried out by Jongbin Lee and Chunghun Lim from the Department of Biological Sciences at UNIST.

Almost all organisms living on Earth—from bacteria to humans—exhibit circadian rhythms. The circadian rhythms are physical, mental, and behavioral changes that follow a roughly 24-hour cycle, responding primarily to light and darkness in an organism’s environment. A morning-glory flower opens during the day and closes at night due to its circadian rhythm. Biological clocks also play an important role in the regulation of a wide range of physiological and behavioral systems, such as energy metabolism and sleep-wake cycles. Nobel prizes in physiology or medicine have also been awarded to scientists for their groundbreaking work, uncovering the genetic basis of circadian rhythms in fruit flies.

While searching for mutants in Drosophila melanogaster, Professor Lim’s research team identified flies with a poor sense of behavioral rhythm that bore a mutation in a gene, called Tango10 (short for TrANsport and Golgi Organization 10). Due to its nature of sleeping less, they named this mutant busy run (bsr), based on a Korean word meaning “diligent” and pronounced as [bu:zirʌn].

In this study, the researchers proposed that the adaptor protein Tango10 regulates ubiquitination by the enzyme Cul3 to transduce molecular oscillations from the core molecular components of the cellular clock to the output pathway of neuropeptide release, to regulate behavioral circadian rhythms.

In order to better understand the molecular underpinnings of the daily ‘wake-up signal,’ which alerts an animal it’s time to awake, the research team focused on pacemaker neurons that regulate the sleep-wake cycle and used genetic screening to identify genes that regulate the neurons.

Using two independent genetic screens, the researchers identified mutants of Tango10 with poor behavioral rhythmicity. In flies bearing normal copies of the gene, the protein levels of Tango10 go up and down every day. This modulates the activity of the pacemaker neurons which in turn drives the animal’s sleep-wake cycle and behavior. In flies that lack the Tango10 gene, this daily rhythm is disrupted, noted the research team. 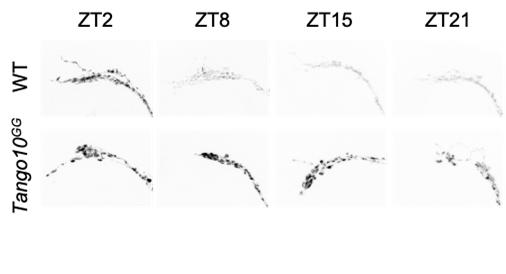 Their findings showed Tango10 expression in pacemaker neurons expressing a neuropeptide, called pigment dispersing factor (PDF) is required for the regular rhythms in neuronal activity in these neurons. Loss of Tango10 causes PDF to pile up at the nerve terminals. This occurs even when the gears of the clock machinery are intact. The authors showed TANGO10 protein levels also fluctuate rhythmically in nerve terminals that express PDF, similar to the gear components.

To probe into the molecular partners of Tango10, the authors conducted a mass spectrometry analysis and uncovered that the protein binds to a ubiquitin ligase, called CULLIN 3 (CUL3). Loss of CUL3 results in a similar loss of rhythm in mutant flies as does Tango10, noted the research team.

Meanwhile, this research has been carried out in collaboration with Professor Ravi Allada and his research team at Northwestern University. It has been supported by the Bio·Medical Technology Development Program through the National Research Foundation.