Their findings have been published in Nature Communications on January 3, 2020.

A joint research team, led by Professor Ja Yil Lee (School of Life Sciences, UNIST) and Professor Ji-Joon Song (Department of Biological Sciences, KAIST) has unveiled the structure and mechanism of proteins that are highly overexpressed in various cancers and associated with poor patient prognoses. Such research findings could speed up the discovery and development of new cancer drugs.

DNA, the genetic material responsible for inheritance in humans, exists in a high-order structure. Such structure, known as chromatin, consists of DNA wrapped around certain proteins, known as histones. The function of chromatin is to efficiently package DNA into a small volume to fit into the nucleus of a cell and protect the DNA structure and sequence.

Regulation of histone proteins allows the DNA strands become more tightly or loosely coiled during the processes of DNA replication and gene expression. However, problems may arise when histones clump together or when DNA strands intertwine. Indeed, the misregulation of chromatin structures could result in aberrant gene expression and can ultimately lead to developmental disorders or cancers.

Histone chaperones are those proteins, responsible for adding and removing specific histones at the wrong time and place during the DNA packaging process. Thus, they also play a key role in the assembly and disassembly of chromatin. 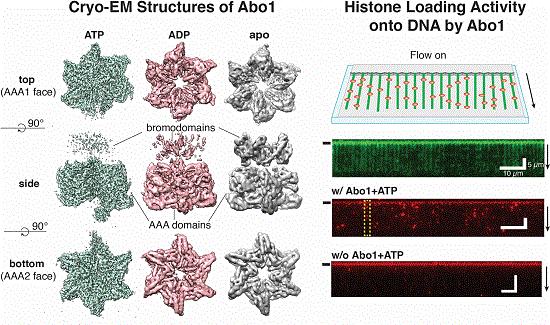 Molecular structures of Abo1 in different energy states (left), Demonstration of an Abo1-assisted histone loading onto DNA by the DNA curtain assay.

The study focused on ATAD2 (also termed ANCCA), a histone chaperone that has been implicated in nucleosome density regulation by histone H3–H4 loading or removal. It is highly overexpressed in various cancers and associated with poor patient prognoses. As a result, there has been demand for development of therapeutic agents, targeting ATAD2 protein and some clinical trials are already underway. Yet, to date, no specific information about the structure and function of ATAD2 gene have been revealed to the public.

Through the use of cryo-electron microscopy (Cryo-EM) that allows direct observation of proteins in native and near-native states in atomic detail, the research team identified the structural details of ATAD2 protein. They presented cryo-EM structures of an ATAD2 family ATPase to atomic resolution in three different nucleotide states, revealing unique structural features required for histone loading on DNA, and directly visualize the transitions of Abo1 from an asymmetric spiral (ATP-state) to a symmetric ring (ADP- and apo-states) using high-speed atomic force microscopy (HS-AFM).

Additionally, they find that the acidic pore of ATP-Abo1 binds a peptide substrate which is suggestive of a histone tail. Based on these results, we propose a model whereby Abo1 facilitates H3–H4 loading by utilizing ATP.

“This study is meaningful, as it reveals the structure and mechanism of histone chaperones protein through the use of cutting-edge techniques in biophysical, such as Cryo-EM,” says Professor Lee. “This will accelerate the development of drug candidates, targeting ATAD2.”

The findings of this research have been published in Nature Communications on December 17, 2019. This study has been supported through the Mid-career Research Program, funded by the Ministry of Science and ICT (MSIT).