Professor Guntae Kim and his research team at UNIST. From left are Ohhun Gwon, Professor Kim, and Seona Kim.

Their findings, published online in the Octobe issue of the prestigious journal ACS Nano.

Research in lithium-ion batteries has opened up a plethora of possibilities in the development of next-generation batteries. In particular, the metal-air batteries with significantly greater energy density close to that of gasoline per kilogram, has recently been acknowledged and invested by world’s leading companies, like IBM.

A recent study, affiliated with UNIST has presented novel catalyst to accelerate the commercialization of metal-air batteries. This breakthrough has been jointly led by Professor Guntae Kim and Professor Jaephil Cho in the School of Energy and Chemical Engineering at UNIST in collaboration with Professor Yunfei Bu from Nanjing University of Science and Technology, Nanjing, China. Their new catalyst possesses the structure of nanofiber-based perovskite materials and exhibits excellent electrochemical performance, close that of today’s precious metal catalysts, yet still inexpensive.

A metal-air battery is a type of fuel cell or battery that uses the oxidation of a metal with oxygen from atmospheric air to produce electricity. It is equipped with an anode made up of pure metals—like lithium or zinc—and an air cathode that is connected to an inexhaustible source of air. The catalysts in the air cathode aids the electrochemical reaction of the cell with oxygen gas. Metal-air batteries have attracted significant research attention as the new generation of high-performance batteries as they the advantages of (1) simple structure, (2) extremely high energy density, and (3) a relatively inexpensive production.

The currently existing metal-air batteries use rare and expensive metal catalysts for their air electrodes, such as platinum (Pt) and iridium oxide (IrO₂). This has hindered its further commercialization into the marketplace.

In the study, Professor Kim and his research team have developed a new catalyst, using the cation ordered double perovskite with high electrical conductivity and catalyic performance. They prepared a series of PrBa0.5Sr0.5Co2-xFexO5+δ (x = 0, 0.5, 1, 1.5, and 2, PBSCF) and determined the optimum cobalt (Co) and iron (Fe) contents through electrochemical evaluation. 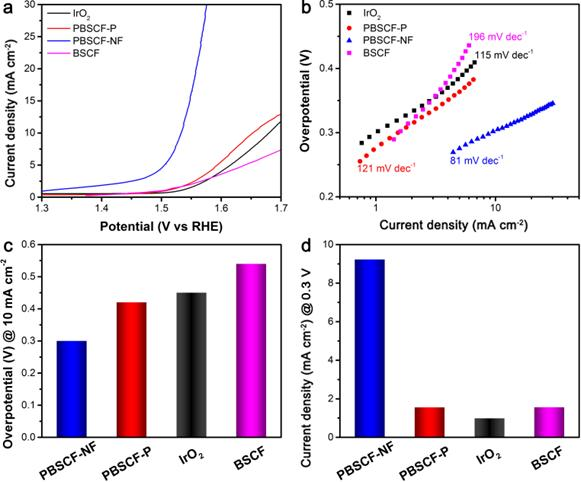 “The structure of mesoporous PrBa0.5Sr0.5Co2-xFexO5+δ nanofiber (PBSCF-NF) has high surface areas, result from uniform pore diameters,” says Ohhun Gwon in the Combined M.S/Ph.D. of Energy and Chemical Engineering, the first author of the study. “This nanofiber has also brought significant improvements in the performance of the oxygen reduction reaction (ORR) and oxygen evolution reaction (OER).”

According to the research team, this nanofiber has improved the bi-functionality of ORR/OER. Particularly, the OER performance was about 9 times higher than that of state-of-the-art precious metal oxide IrO2 at overpotential of 0.3 V. Furthermore, it also demonstrated notable charge-discharge stability even at high current density in Zn-air batteries.

“We envision that the high electrochemical and catalytic performance of this material will play a major role in the commercialization of metal-air batteries,” says Professor Kim. “Metal-air battery technology is still in its infancy and extensive additional research efforts appear to be required before a viable commercial implementation is developed.”

He adds, “However, as many global corporates, such as IBM, Toyota, and Samsung Electronics are already working on the development of metal-air batteries, the technical challenges could soon be cleared out in a much faster pace than anticipated.”

The findings of the research have been published online in the October issue of the prestigious journal ACS Nano. This study has been supported by the Mid-Career Researcher Program through the National Research Foundation of Korea (NRF), funded by the Ministry of Science, ICT and Future Planning and 2017 Research Fund of UNIST.