Home All News Research Researchers Probe the Cage Formation of the Glass at Surgical Precision! A research team, led by Director Steve Granick of the IBS Center for Soft and Living Matter at UNIST, probe the cage formation of the glass at surgical precision and elucidate the onset of glass transition.

Researchers Probe the Cage Formation of the Glass at Surgical Precision!

An international team of researchers, affiliated with UNIST, probe the cage formation of the glass at surgical precision and elucidate the onset of glass transition.

This breakthrough has been led by Director Steve Granick (Distinguished Professor, Department of Chemistry) and the Research Fellows, Bo Li and Kai Lou of the IBS Center for Soft and Living Matter at UNIST, in collaboration with Professor Walter Kob from the University of Montpellier and Institute Universitaire de France. Together, they reported that the onset of glass transition is a highly non-trivial process involving complex non-linear responses.

As a substance that has been giving remarkable impetus to both the convenience of our daily life and the advance of modern science and technology, glasses puzzle us, however, on the basic science level. “Glasses see much incremental study but rarely a breakthrough, regardless of the endeavors from generations of scientists,” commented Director Granick.

The reported non-monotonic dynamical length scale peaking at the onset temperature subverts the prevalent understanding that cage formation is a simple crossover between liquid and glass. “One central question in glass science is the cage formation process that gives the glassy materials their unique optical and mechanical properties,” said Kob, “And, we directly hit the problem by locally exciting a colloidal glass using laser beams,” said Li.

The emergence of the non-monotonic length scale results from the buildup of domains with cooperative dynamics that become increasingly rigid and start to dominate the particle dynamics. “Just like the painting of Seurat, the mosaic of the dynamical grains,” Kob commented with enthusiasm, “And the cage formation is directly related to the merging of them.” “The beauty of science here is that we are able to see how glasses germinate from the liquids microscopically,” Li said.

The simple physical picture of the enhanced cooperative dynamics for the non-monotonic response suggests the finding should be general. Kob said, “It’s amazing that the physical rule behind such rich dynamics is so concise,” “And our findings in a well-defined model system will help better understanding other glassy or disordered systems like polymer, granular and atomic glasses, etc.,” Li remarked. 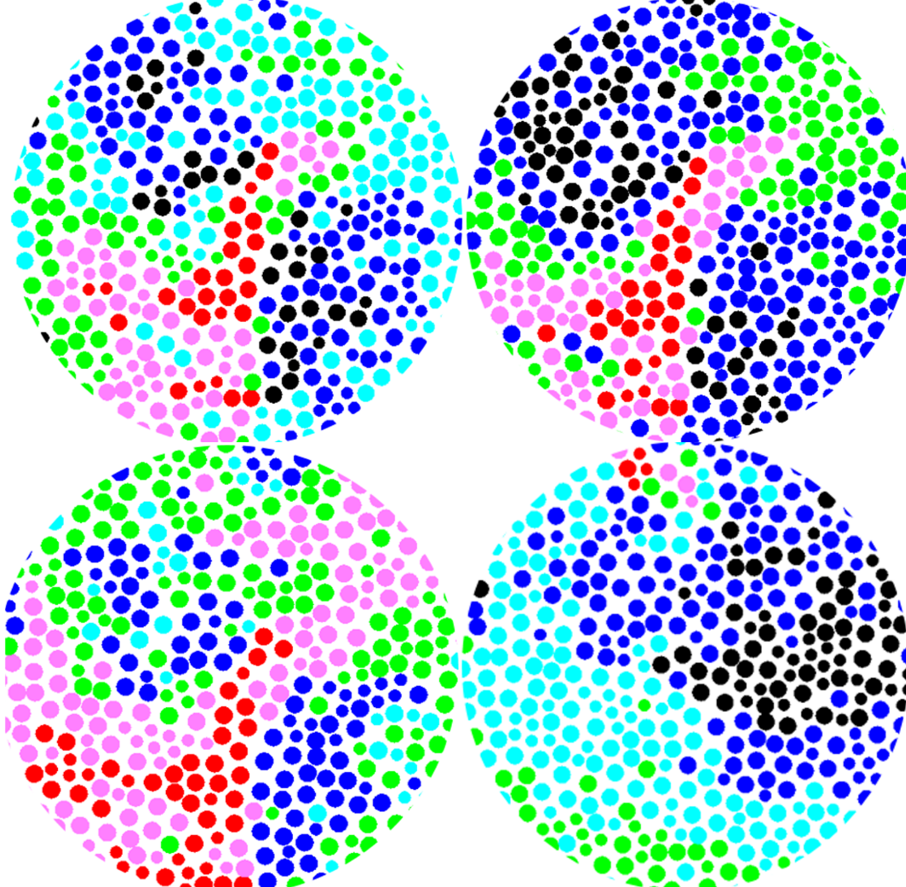 In addition to the non-monotonic behavior, a scaling relation between the morphology and size of the excitation pattern is extracted based on huge amount of experimental data. “The deviation of this relation reflects the degree of a material’s heterogeneity at certain condition” said Li. And Director Granick remarked, “This scaling law, besides its theoretical importance for physicists, will interest chemists and material scientists as well by offering them a ‘ruler’ that guides the design and synthesis of glass materials.”

Beyond enlightening the first step of glass transition, this proof-of-concept experiment paves the way for the fundamental understanding of glasses eventually. “Using laser as a lancet, a glass sample can be precisely anatomized,” said Director Granick. “More and more exotic yet puzzling behaviors in glasses will be assessed in this way,” remarked Kob.

This work is motivated by the long-standing challenges in glass science. The sluggish and highly coupled dynamics always burry the key effect. “If only I can shrink myself, jump into the system and stir the surroundings,” once Li conceived, “Perhaps laser is a good choice.” The femtosecond holographic laser system originally developed by Lou perfectly satisfy the needs of the local excitation. Valuable theoretical support is obtained from Kob for refining the complex experimental observations into concise physical principles. “The highly interdisciplinary environment in our center and successful international collaboration makes a once improbable brainstorm real,” commented Director Granick.

Director Granick and Kob concluded: “The field of glass science, being classic but constantly challenging, is promoted by this experiments that elucidating the onset of glass transition. The conceptual importance of cage-formation for the properties of glassy materials is revealed. And the micro-rheological approach taken here opens the door to the thorough understanding of the glasses one day.”

These findings were published in the 7833 issue of Nature magazine. The study was performed at the IBS Center for Soft and Living Matter by authors Bo Li, Kai Lou and Steve Granick, collaborating with Walter Kob from University of Montpellier.