Their findings have been published in the May 2021 issue of Matter, a sister journal to Cell.

The multifunctional porous solids with diverse functionalized linkers have been utilized as promising materials for various applications in energy, environmental and biomedical areas. Although their emerging properties are ascribed to varying pore types resulting from combinations of functional groups, the chemical environment of the pores remains an open question. A new synthetic platform where the population of pores can be identified and further controlled is of great interest in materials science.

A research team, led by Professor Wonyoung Choe and Professor Tae-Hyuk Kwon in Department of Chemistry at UNIST has recently unveiled a new synthetic approach for controlling functional group assemblies in porous solids by using a cage-based framework, also known as metal-organic polyhedra (MOPs). Their findings are expected to have attracted attention as a useful synthetic strategy for catalysis, gas storage, and molecular separation. 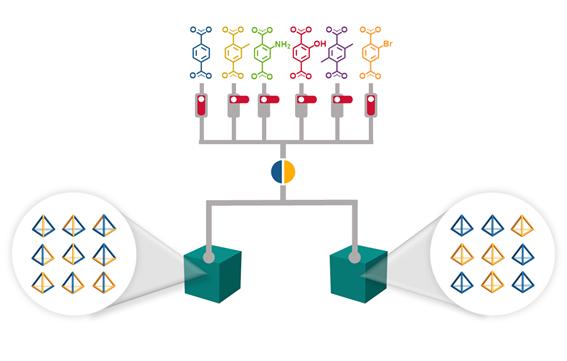 MOPs are the three-dimensional assembly of discrete cages. While MOPs share compositional similarities (i.e., metal clusters and organic linkers) with their solid-state counterparts, metal-organic frameworks (MOFs), the discrete and soluble nature of MOPs provides a unique advantage. In their study, the research team developed two-step self-assembly where functionalized cages are mixed. The authors call the new synthetic strategy as ‘mixed-cage’, which is drastically different from the conventional mixing strategy, so-called ‘mixed-linker’. While mixed-linker strategy results in a random distribution of functionalized organic linkers over the framework, mixed-cage strategy yields identical functional groups on each cage unit. “Structure determines function and solids are not the exceptions,” said Professor Wonyoung Choe. “Yet, what is more interesting here is that we find a new way to control the assembly of packing, using metal-organic polyhedra.” He adds, “Such advance can alter the way of controlling the molecule-based solids.” The findings of this research have been published in Matter on May 26, 2021. This study has been supported by the National Research Foundation (NRF) of Korea via the Mid-Career Researcher Program, Science Research Center (SRC), Technology Development Program to Solve Climate Changes, and Global Ph.D. Fellowship (GPF), as well as Korea Environment Industry & Technology Institute (KEITI) through Public Technology Program based on Environmental Policy Program, funded by Korea Ministry of Environment (MOE).