Home All News Research When A Spinning Toy Meets Hydrodynamics: Point-of-care Technology Is Set in Motion A research team, led by Professor Yoon-Kyoung Cho in the School of Natural Science at UNIST has unveiled a fidget spinner inspired microfluidic chip can diagnose infectious diseases at the time and place of patient care.

When A Spinning Toy Meets Hydrodynamics: Point-of-care Technology Is Set in Motion

Their findings have been published in Nature Biomedical Engineering on May 19, 2020.

A fidget spinner inspired microfluidic chip can diagnose infectious diseases at the time and place of patient care.

About 60% of women will experience urinary tract infection (UTI) at least once in their lifetime. With antibiotic-resistant organisms increasing, UTI is likely to bring more of the health and economic burden. To turn things around, point of care testing (POCT) technology has been identified as a breakthrough in diagnosing suspected UTI patients. POCT enables staff to provide real-time, lab-quality patient care when and where it is needed. Despite recent advances by POCT, every year millions of people die of treatable illnesses, such as UTI and of the lack of diagnosis in developing parts of the world. It is a pressing need for technologies to bridge this existing gap.

Professor Yoon-Kyoung Cho (School of Natural Science) and her research team from the Center for Soft and Living Matter (CSLM), within the Institute for Basic Science (IBS) at UNIST have reported a diagnostic fidget spinner (Dx-FS) that allows for highly sensitive and rapid diagnosis and prescription-only with hand power. Fidget spinners are boomerang-shaped toys whose ball bearings reduce friction and allow things to rotate freely for a long time (Figure 1A). One flick of the fidget with a finger sets the gadget in motion. By exploiting the centrifugal force derived from the design of a fidget spinner and their novel mechanism called, a fluid assisted separation technology (FAST), the research team optimized the fluidic dynamics in Dx-FS. This mechanism enables the Dx-FS to work just with one or two spins by hand and to produce 100 times more enriched pathogens that can be easily seen by naked-eyes without the need for bacteria culture (Figure 1B). 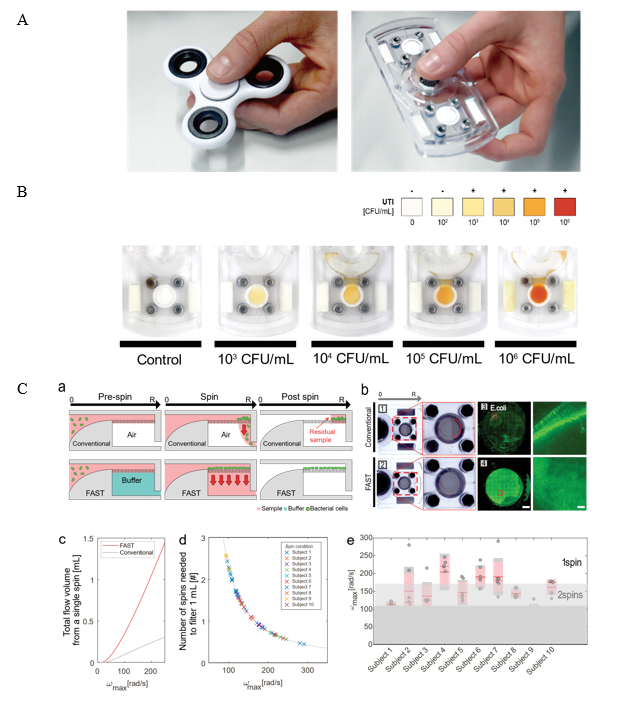 ▲ Figure 1. (A) Photographs of a fidget spinner toy (left) and a diagnostic-fidget spinner (right). (B) Bacterial load detection by color changes. Orange color shows a high bacterial cell load. (C) Fluid Assisted Separation Technology (FAST) enables rapid and robust enrichment of bacteria. (C-a) Cross-sectional view of the device depicting sample bacterial enrichment through the filter membrane in the conventional (upper) and FAST (lower) setups. (C-b) Images showing effective filtration during rotation and fluorescence images of bacterial cells enriched on the membrane for (1 and 3) conventional and (2 and 4) FAST filtration. Scale bar: 2 mm / 0.1 mm. (C-c) Flow volume of Dx-FS estimated at ω_max. (C-d) Number of spins by 10 independent subjects who spun Dx-FS. The angular velocities were measured, and the number of spins to elute 1 mL of liquid was estimated. (C-e) Measurements from (d) plotted for each subject. Red lines, dashed red lines, and gray and red boxes over the measurements (gray dots) denote the mean, median, standard error of mean, and standard deviation. The gray areas indicate the number of spins in (d). l Image Source: Institute for Basic Science (IBS)

The conventional approach for the diagnostics of infectious disease requires time-consuming cell culture as well as modern laboratory facilities. Worse yet, typical bacterial cell enrichment requires huge force and it is prone to membrane fouling or clogging due to the pressure imbalance in the filtration chamber.

“Though the centrifugal force serves as an ‘engine’ of the device, the force is felt more strongly in the outer path as it acts outwardly away from the center of rotation. The imbalanced impact of the centrifugal force keeps some of the sample left in the membrane. We utilized hydrodynamic forces that acts vertically to the centrifugal force by filling the filter membrane with liquid before the spinning process. This minimized the pressure drop and brought the uniform pressure balance throughout the entire area of the membrane. This allowed for maximized bacterial cell enrichment efficiency while minimizing the force needed for the filtration. Therefore, one or two spins were enough to filter 1 mL of sample despite a large variation in the spin speed among different operators with different hand power (Figure 1C),” explains Professor Yoon-Kyoung Cho, the corresponding author of the study. 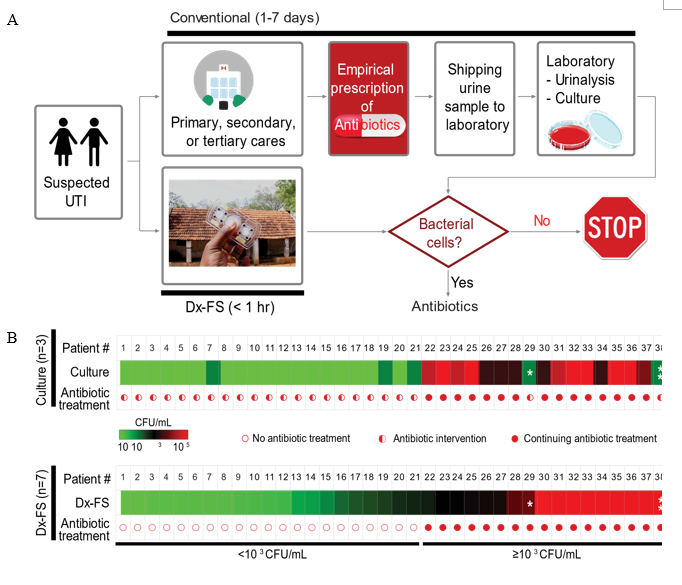 ▲ Figure 2. (A) A flow chart showing a diagnostic process of urinary track infection (UTI) from the hospital (conventional) or diagnostic-fidget spinier (Dx-FS). The conventional process requires urine culture or urinalysis at a centralized laboratory, which takes 1 to 7 days and an empirical antibiotic would be treated to the UTI suspects. Ours can show the results within an hour and a proper antibiotic prescription is possible. (Down) Urine samples from 39 UTI suspects were tested by an expert in a centralized laboratory (culture) or ours (Dx-FS). (B) Bacterial cell load measured from culture method or Dx-FS were well matched. l Image Source: Institute for Basic Science (IBS)

In FAST-based particle separation, the fluid flow caused by centrifugal force is in a direction perpendicular to the filtration flow through the membrane. In addition, the drainage chamber underneath the membrane remains fully filled with the liquid during the entire filtration process. This is achieved by placing a buffer solution in the bottom chamber of the membrane prior to the spinning process, which ensures uniform filtration across the entire area of the membrane and significantly reduces the hydrodynamic resistance.

The research team verified Dx-FS can perform ‘sample-in-answer-out’ analyses. The research team tested urine samples from 39 UTI suspects in Tiruchirappalli, India. Compared to the gold-standard culture method, which has a relatively long turnaround time, Dx-FS provided a comparable answer on site in 50 minutes. The experiment shows 59% of UTI suspects were over/under-treated for antibiotics, which may be saved by using Dx-FS (Figure 2). Further, they performed a rapid antimicrobial susceptibility test (AST) for two antimicrobial drugs on 30 UTI patients using Dx-FS. The test produced 100% accurate results within 120 minutes (Figure 3). 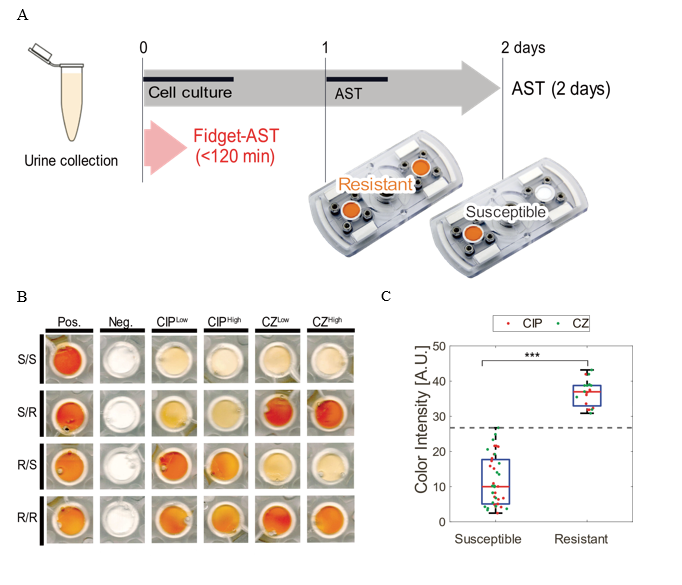 ▲ Figure 3. Antimicrobial susceptibility test using Dx-FS. Fidget based antimicrobial susceptibility test (Fidget-AST) was carried out with 30 patient origin bacterial cells. (A) Schematic of the Fidget-AST procedure. An antibiotic drug is mixed with the sample for 20 min, followed by a Dx-FS microbial detection assay for 45 min. (B) Two antibiotic drugs, ciprofloxacin (CIP) and cefazolin (CZ) were tested in two dosages according to CLSI guideline. Four cases of both CIP and CZ susceptible, CIP or CZ susceptible/resistant, or both CIP and CZ resistant are shown. (C) Color intensity measures of 30 samples. Dotted line is the cutoff from ROC analysis.