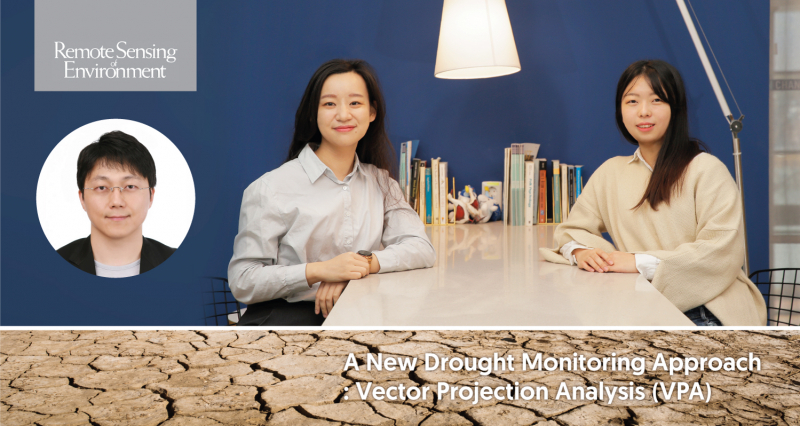 Professor Jungho Im and his research team in the Department of Urban and Environmental Engineering at UNIST proposed a satellite-aided drought monitoring method that can adequately represent the complex drought conditions into a single integrated drought index.

Their findings have been published in the January 2021 issue of Remote Sensing of Environment.

A team of researchers, affiliated with UNIST has proposed a satellite-aided drought monitoring method that can adequately represent the complex drought conditions into a single integrated drought index. The newly-proposed drought index has attracted considerable attention as a new method for monitoring and forecasting drought hazards due to its accuracy with no space-time constraints.

Drought is one of the most complex natural disasters. Therefore, unlike most other natural disasters, it is usually difficult to define the drought onset or drought declaration. For this reason, various drought indices (i.e., drought severity, the area affected, duration, and timing) are used to monitor drought and its risk management. The existing drought indices are tended to be specific to particular types of drought indicators. Therefore, in order to comprehensively investigate drought disasters, we need a more generalized index that is suitable for varied drought conditions.

Professor Jungho Im and his research team in the Department of Urban and Environmental Engineering at UNIST proposed a new drought monitoring approach with an adaptive index — Vector Projection Analysis (VPA) and Vector Projection Index of Drought (VPID). The new approach is said to consider multiple drought indicators in various climate zones across the Contiguous United States (CONUS) and East Asia. A major advantage of VPA, according to the research team, is that it uses multiple dependent variables (i.e., surface-based drought indices) and multiple independent variables (i.e., satellite-derived drought factors) to capture varied climate and environmental characteristics.

In this study, three schemes of VPID with different combinations of variables focused on integrated-, short-, and long-term drought (VPIDinte, VPIDshort, and VPIDlong, respectively) were also evaluated over the CONUS and East Asia. According to the research team, all three schemes showed good agreement with both multi-timescale surface-based indices and drought references (USDM and EM-DAT) across the study areas at continental scales.

“This implies that VPA can capture the general trends of multi-drought indices across a wide area with heterogeneous characteristics. Since VPA is a simple method to determine the weight of its calculation under the consideration of multi-dependent variables (i.e., drought indices), it will be helpful to monitor the general characteristics of complex drought conditions in a simple way,” noted the research team.

Figure 2. Spatial distribution of VPID schemes, USDM and surface-based drought indices (SPI1, SPEI6, and scPDSI) over the US for 2011–2012 (extreme drought case).

The findings of this research have been published in the January 2021 issue of Remote Sensing of Environment, an internationally renowned journal in the field of remote sensing. This study has been supported by the the Korea Meteorological Administration (KMA), the Korea Meteorological Institute (KMI), the Ministry of Science and ICT (MSIT), and the Ministry of the Interior and Safety (MOIS).