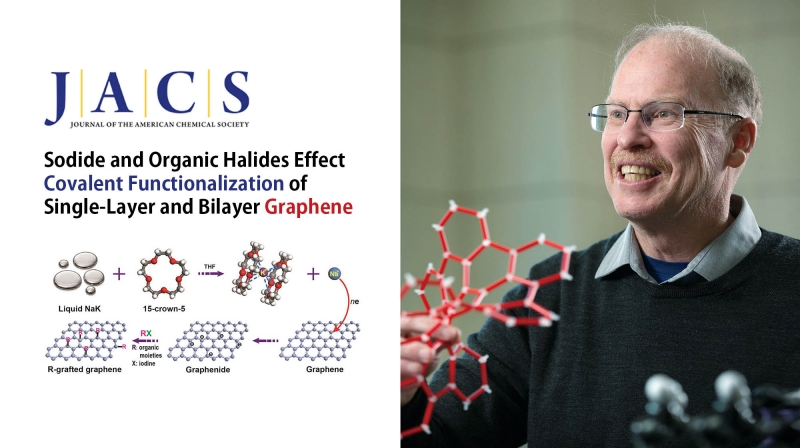 The work by Distinguished Professor Rodney S. Ruoff has been published in the March issue of JACS.

The study discloses a new platform to attach chemical groups on graphene lying on a silica/silicon substrate.

A recent study, affiliated with UNIST has revealed a new method to add chemical groups on (that is, to “functionalize”) single layer (SLG) and bilayer (BLG) graphene lying on silica/silicon. Their findings, published online in the March issue of the Journal of the American Chemical Society (JACS), suggest how decorated graphene serves as a platform to produce 2D materials with new characteristics.

This study has been led by Distinguished Professor Rodney S. Ruoff’s team from the Center for Multidimensional Carbon Materials (CMCM), within the Institute for Basic Science (IBS) at UNIST, in collaboration with Renmin University of China (RUC), China and CEMES-CNRS and University of Toulouse, France.

Functionalization of SLG on silica/silicon has been previously reported, but when a BLG is used, the reaction turns out to be much more complicated. BLG has different reactivity because two graphene layers adhere to each other through what are known as van der Waals forces, make BLG more chemically stable and even unreactive for some reactions. Additional fascinating aspects include the reactivity of each of the layers in BLG and other factors that can influence the reaction.

To compare and contrast reaction of SLG and BLG, the team produced flawless samples of SLG and BLG and made them more prone to react by immersing them in a mixture of sodium-potassium alloy (NaK) and a ring-shaped crown ether molecule (15-crown-5) in tetrahydrofuran (THF). This solution forms a negatively charged sodium ion (Na−), which reduces graphene by donating electrons to it, and allows SLG and BLG to react with other molecules more easily.

Using this reaction, IBS researchers demonstrated that although BLG is less reactive than SLG, both of them can be functionalized. Moreover, by using a BLG with one layer of normal carbon and another layer of carbon isotope-labeled carbon (13C), the scientists clarified that both the upper and lower layers of graphene are decorated. 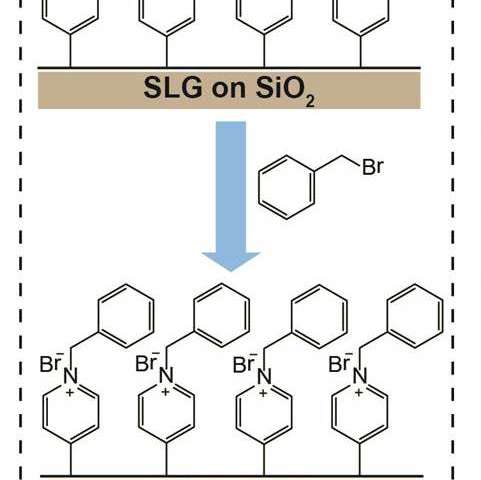 The team also showed that functionalized graphene can undergo further chemical reactions with other molecules, which would hardly bind to it otherwise for the reaction conditions used. For example, graphene functionalized with 4-iodopyridine can then further react with benzyl bromide. This is a particularly interesting approach, since graphene decorated with benzyl bromide can be used for sensors and can be decorated with more chemical groups, greatly expanding the ‘toolkit’ of options.

“We envision that this method and platform will contribute to expanding the application range of graphene,” comments Rodney S. Ruoff, corresponding author of the paper.