Their findings have been published in the June issue of Applied Physics Letters.

Stepping into the elevator sometimes disconnect the caller completely. This is because the metal box of the elevator causes the cell phone to stop transmitting radio signals. Elevator signal boosters have been suggested as the solution to the cell phone-elevator problem, involving poor cell reception.

A recent study, affiliated with UNIST has found a more convenient way to extend signal coverage in elevators, using a planar metasurface made of sinusoidal modulation inside a closed rectangular metallic ring placed over a dielectric substrate. This research has attracted the attention of many researchers as a new method for electromagnetically induced transparency (EIT), which allows radio waves to pass through metal.

Electromagnetically induced transparency (EIT) is an effect that allows a laser beam to propagate through an optically dense medium as if the medium were transparent. In general, radio waves cannot penetrate too far into the metal, as radio waves are affected by the phenomena of reflection and adsorption.

Although EIT allows certain wavelengths of light to pass through, it has been difficult to use EIT for communication through metal barriers. This is because EIT is a coherent interference phenomenon generally observed in a three-level atomic system, which often requires sophisticated experimental conditions, such as cryogenic temperatures and high intensity optical pump. 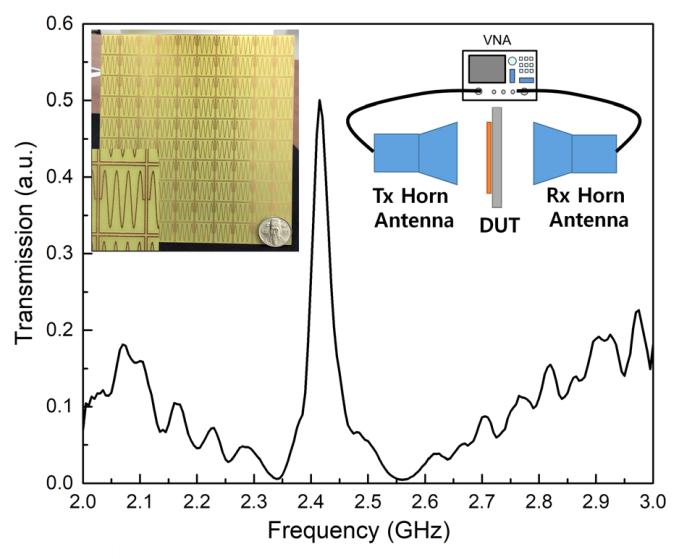 Measured transmission in the anechoic chamber (photograph of the sample in the inset).

In the study, the research proposed a novel way to achieve electromagnetically induced transparency without the need for having sophisticated experimental conditions. In recent experiments they conducted, the team observed that certain wavelengths of light pass through metal using the proposed sinusoidal modulation inside the regular rectangular ring. Besides, by changing the size or arrangement of the pattern, they could also control the frequency range that passes through metal.

“This is the first time to succeed electromagnetically induced transparency, using the proposed sinusoidal modulated rectangular structure,” says Dr. Jagannath Malik, the first author of this study. “Our experiments demonstrated that radio wave energy is trapped in a regular pattern, and then passes through the metal.”

Dr. Jagannath Malik in the School of Electrical and Computer Engineering at UNIST.

The proposed sinusoidal modulated rectangular structure traps radio waves for a certain period of time. This will allow enough energy to be collected and to pass through metals. The study also found that different wavelengths are perceived when changing the size and shape of the proposed structure.

“Such concept helps us to gain a better understanding of metamaterials, capable of transmitting radio waves with a pattern engraved on a substrate,” says Professor Bien. “Further studies on precise frequency range, according to the size and shape of the proposed sinusoidal pattern can be applied in various fields.”

The findings of this study have been published in the June issue of Applied Physics Letters (APL), the highest ranking journal in its field.