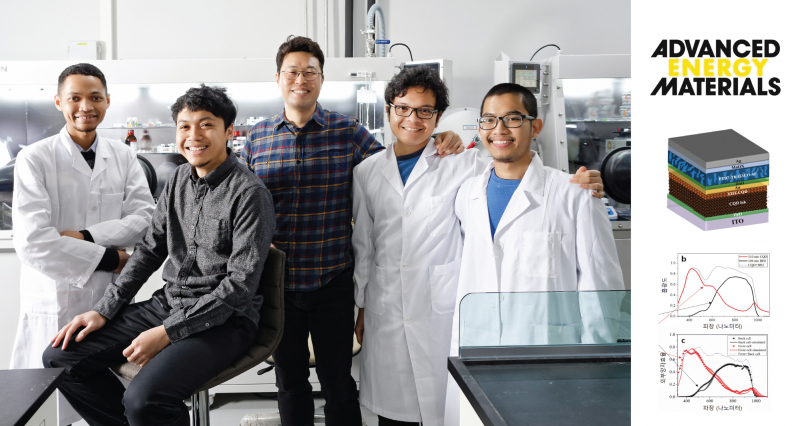 Professor Sung-Yeon Jang and his research team in the School of Energy and Chemical Engineering at UNIST.

Their findings have been published in Advanced Energy Materials on January 13, 2020.

Colloidal quantum dot (CQD) solar cells have attracted considerable attention due to the advantages of being flexible and lightweight. Besides, they are much easier to manufacture, compared with that of commercial silicon solar cells in use today. A novel technology, capable of maximizing the performance of the existing CQD solar cells has been developed, recently.

Quantum dots (QDs) are semiconductor particles with sizes smaller than a few nanometres. As they display interesting phenomena, such as size dependent emission wavelength, the absorption spectra of the solar cell can be quite changeable. In other words, the advantage of QDs is that it shows light absorption in the near-infrared (NIR) region, which other photoactive layers cannot. However, there are some ares in the NIR region where light absorption does not occur, even with QDs.

In the work, researchers developed high‐efficiency CQD/organic hybrid series tandem photovoltaic devices, featuring CQDs and organic BHJs as photoactive materials to compensate for the external quantum efficiency (EQE) loss in the NIR region. The NIR‐absorbing organic BHJ devices were employed as the back sub‐cells to harvest the transmitted NIR photons from the CQD front sub‐cells.

In addition, the team optimized the short‐circuit current density balance of each sub‐cell, and thus created a near ideal series connection using an intermediate layer to achieve a power conversion efficiency (PCE) that is superior to that of each single‐junction device. Indeed, the PCE (12.82% ) of the hybrid tandem device was the highest among the reported CQDPVs, including single‐junction devices and tandem devices, according to the research team. Besides, researchers also noted that “This study suggests a potential route to improve the performance of CQDPVs by proper hybridization with NIR‐absorbing photoactive materials.”

Furthermore, the new hybrid tandem solar cells are manufactured at room temperature and use a solution process for easy manufacturing. As a result, this solar cell is affordable, more economical, and having less cost as compared to silicon solar cells. Their lower manufacturing costs also gives them a clear advantage mass production.

“The hybrid tandem device exhibited almost negligible degradation after air storage for 3 months,” says Professor Jang. “Moreover, this study suggested the potential to achieve PCE > 15% in hybrid tandem devices by reduction of energy loss in CQDPVs and enhancement of NIR absorption in OPVs.”

The findings of this research have been published in the prestigious journal, Advanced Energy Materials on January 13, 2020. It has been supported by the National Research Foundation (NRF) and the Korean Energy Technology Evaluation and Planning (KETEP).