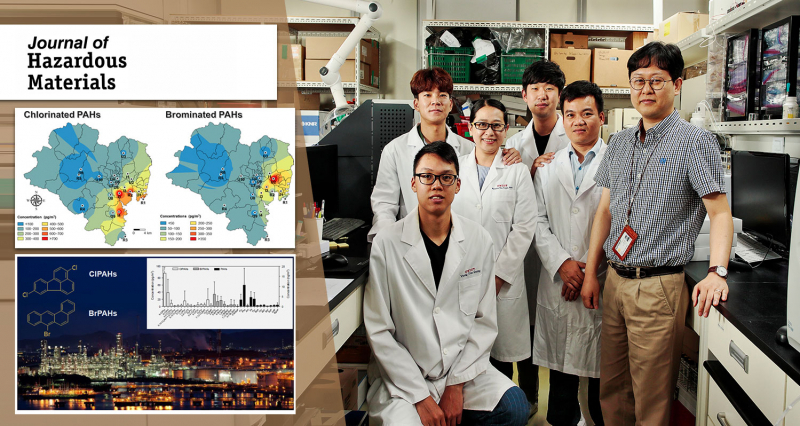 Their findings have been published in the online version of Journal of Hazardous Materials (IF: 7.650) on September 17, 2019.

With increasing public concern about the health risks posed by fine dust air pollution, more research is needed to expand our understanding of hazardous air pollutants (HAPs) contained in fine dust. Some air pollutants appear to be more toxic than the ones that have been reported previously, yet there is a clear lack of research dealing with HAPs.

A recent study, led by Professor Sung-Deuk Choi in the School of Urban and Environmental Engineering at UNIST, introduces a real-time air pollution map, which reports the atmospheric levels of toxic pollution in Ulsan. The study investigates new toxic air pollutant, known as halogenated polycyclic aromatic hydrocarbons (Halo-PAHs). This is the first study that reports levels and patterns of Halo-PAHs in Ulsan, and there is no information or data about their sources in the city.

Halogenated PAHs (Halo-PAHs), such as chlorinated PAHs (ClPAHs) and brominated PAHs (BrPAHs), are a class of compounds with one or more halogen groups attached to the aromatic rings of a polycyclic aromatic hydrocarbon (PAH). They are predominantly emitted to the atmosphere via burning of biomass and vehicle exhaust, in addition to industrial activities. Although some Halo-PAHs are known to be more toxic than their corresponding parent PAHs, but studies on Halo-PAHs have been somewhat limited.

The spatial distributions of ClPAHs and BrPAHs in Ulsan, South Korea.

In this study, passive air samplers were used to monitor Halo-PAH and PAH contamination at 20 sampling sites in Ulsan. Along with the 13 representative PAHs, the research team has identified 35 new Halo-PAHs.

From left are Quang Tran Vuong (first author) and Seong-Joon Kim (second author) in the School of Urban and Environmental Engineering at UNIST.

Out of the 35 target Halo-PAHs, 24 ClPAHs and 11 BrPAHs were also detected. Thus, the researchers also identified that the types of pollutants and the concentrations of each type vary between geographic areas. ClPAHs were found mostly in petrochemical, shipbuilding, and non-ferrous industrial complexes, while BrPAHs were reported to be generated mostly from petrochemical and automobile complexes.

“The Ministry of Environment has so far designated 35 specific air pollutants, yet there is no clear management standard for new hazardous pollutants, like Halo-PAHs,” says Professor Choi. “Therefore, even if the atmospheric environmental standards are met, there is a possible risk of exposure to new hazardous substances.”

Chemical structural formula and concentration levels of ClPAHs and BrPAHs.

“This research has attracted great interest of researchers, as it can provide evidence to support the fact that the concentration of fine dust in Ulsan is relatively low, but with higher level of toxic substances,” says Professor Choi. “In this regard, more in-depth investigations on the formation mechanisms and identification of major anthropogenic sources are necessary.”

He adds, “On the basis of this first passive sampling study on Halo-PAHs, we are conducting seasonal monitoring using PUF-PASs and HiVols for more understanding of the contamination characteristics of Halo-PAHs.”

The findings of this study have been published in the online version of the prestigious Journal of Hazardous Materials (IF: 7.650) on September 17, 2019.