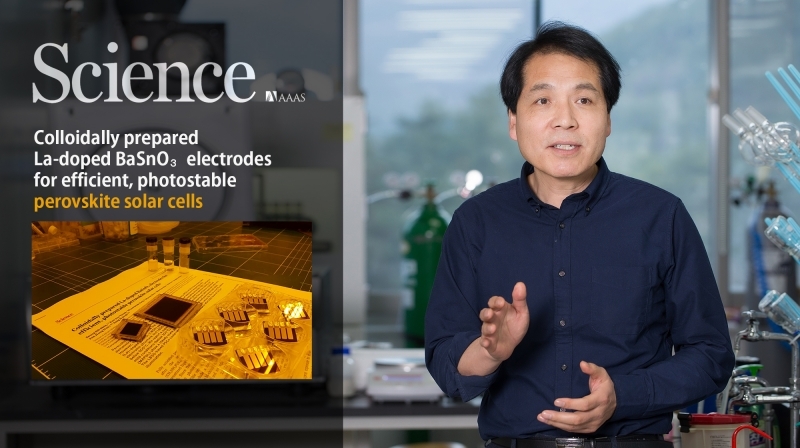 The work by Distinguished Prof. Sang-Il Seok of Energy and Chemical Engineering has been published in the prestigious journal Science.

The work by Distinguished Professor Sang-Il Seok has been published in the March issue of the prestigious journal Science.

A recent study, affiliated with UNIST has presented a new cost-efficient way to produce inorganic-organic hybrid perovskite solar cells (PSCs) which sets a new world-record efficiency performance, in particular photostability. The research team envisions that this method and platform will significantly contribute to accelerate the commercialization of PCSs.

This breakthrough comes from a research, conducted by Distinguished Professor Sang-Il Seok of Energy and Chemical Engineering at UNIST in collaboration with Dr. Seong Sik Shin and Dr. Jun Hong Noh of Korea Research Institute of Chemical Technology (KRICT). Their results, published online in the March issue of the prestigious journal Science, has emerged as the most promising candidate for the next generation high efficiency solar cell technology.

The schematic image above represents the LBSO powder prepared in the study, the solution dispersed in the solvent, and the thin film coated on the substrate. Shown right is the proposed crystal structure of the phase evolution in the CSMC route.

PSCs are made of a mixture of organic molecules and inorganic elements within a single crystalline structure, that together capture light and convert it into electricity. It is an unique crystal structures, consisting of two cations and one anion. They can be fabricated easily and cheaply than silicon-based solar cells, and on a flexible and rigid substrate. Moreover, PSCs reaching a photovoltaic efficiency of 22.1%, comparable to that of single crystalline silicon solar cells (25%), have been attracted much attention as the next-generation solar cells.

Professor Seok has led PSC technology as top scientist in the field. This achievement is based on the previous works (new architecture, process and composition for PSCs) by Professor Sang-Il Seok.

The figure above shows the photovoltaic performance of the LBSO-based PSCs. After 1000 hours of full Sun illumination, only about 7% efficiency reduction was observed.

In this study, the research team reported the fabrication of PSCs satisfying both high efficiency (21.2%) and high photostability of the perovskite solar cells with photoelectrode materials (Lanthanum (La)–doped BaSnO3 (LBSO)) synthesized by a very novel method under very mild conditions (below 200°C). They used methylammonium lead iodide (MAPbI3) peorvskite materials for PSCs.

Photostability refers to the ability to withstand exposure to light without a serios degradation. This new material, presented by Professor Seok’s research team also retain 93% of its initial performance after 1,000 hours of exposure to sunlight. The synthesis of the photoelectrode material can also proceed at less than 200 ℃, which is much lower than that of conventional (high temperature over 900 ℃), making fabrication much easier.

“This study combines the newly-synthesized photoelectrode material and the hot-pressing method to lower the manufacturing cost to less than half of the existing silicon solar cells,” says Professor Seok, corresponding author of the paper. “This study helped us realize PSCs with a steady-state power conversion efficiency of 21.2% and excellent photostability.”

He adds, “This achievement, realized by the unique technology of domestic researchers, has surpassed the conventional low-efficiency and stability limit of next-generation solar cell technology.”

The study has been supported by Global Frontier R&D Program for Multiscale Energy System, Climate Change Program, and Wearable Platform Materials Technology Center through the National Research Foundation of Korea (NRF), funded by the Ministry of Science, ICT and Future Planning.