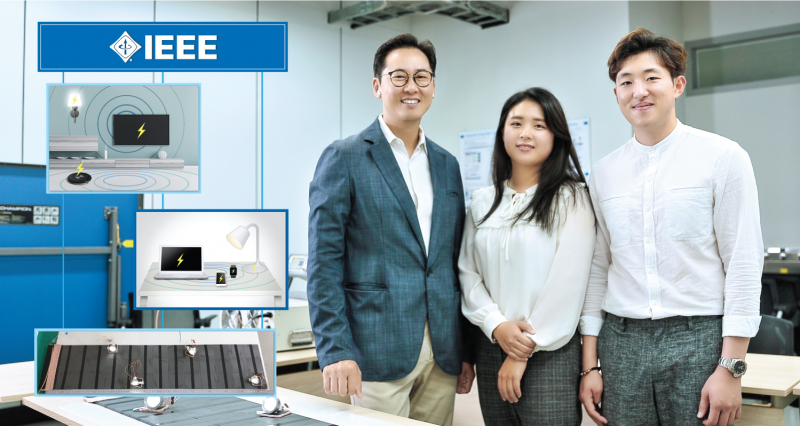 Professor Franklin Bien and his research team in the School of Electrical and Computer Engineering at UNIST have introduced a free arrangement wireless power transfer (WPT) system with a ferrite transmission medium and geometry-based performance improvement method.

Their findings have been published in IEEE Transactions on Power Electronics on October 4, 2019.

With the appearance of IoT and 5G technologies, wireless charging has become an extremely important feature for mobile devices, such as smartphones and tablets. As wireless charging technology advances, one major hurdle is that users need to find the right spot to place their devices for optimum charging.

To tackle this issue, Professor Franklin Bien and his research team in the School of Electrical and Computer Engineering at UNIST have introduced a new wireless power transfer system that can recharge multiple electronic devices simultaneously, and at a much larger scale. At the heart of this technology is ‘ferrite’ in the form of a plate, which is used as the power transmission medium in this system.

Wireless charging system works on the basis of electromagnetic induction principle that uses an electromagnetic field to transfer energy between two objects. The bigger the change you have in the magnetic field, the greater amount of voltage. This allows power to even transfer at a distance from the power supply.

Conventional wireless charging, so-called inductive charging uses air as a medium for transmitting magnetic fields. Despite the numerous benefits of wireless charging, there are still some limitations as to the distance between a device and a charging pad. If the arrangement between the two is not properly aligned or too far apart, the energy efficiency will drop dramatically, thus will stop charging.

Figure 1. Four LED bulbs are lighted with the proposed WPT system. The maximum distance of a bulb from the Tx coil is 130 cm.

According to the research team, the proposed system addresses the efficiency collapse caused by misalignment or increased distance between the transmitter and receiver coils, that is, receivers can be located anywhere on the plate-shaped system, which can be applied to a table, wall, or floor to supply electrical power as needed.

“The new wireless power transfer system employs ferrite with high permeability to achieve higher efficiency than air as the medium, while suggesting enhanced structural design,” says Seoktae Seo (School of Electrical and Computer Engineering, UNIST), the first author of the study. “Indeed, with the proposed WPT system, one can charge all their devices simultaneously, no matter how they are placed.”

“Despite its high cost, ferrite is advantageous over air as a medium as the latter diminishes the efficiency at a distance or misalignment,” says Professor Bien. “We will be looking for alternatives to ferrite, and further research to optimize the system.” He adds, “It will be applied to desks, tables, walls and floors in the future, and will be the driving force of the coming IoT era.”

This work has been supported by the Ministry of Science and ICT (MSIT) under the Information Technology Research Center (ITRC) support program supervised by the Institute for Information & communications Technology Promotion (IITP). The findings of this study have been published in the online version of IEEE Transactions on Power Electronics on October 4, 2019.