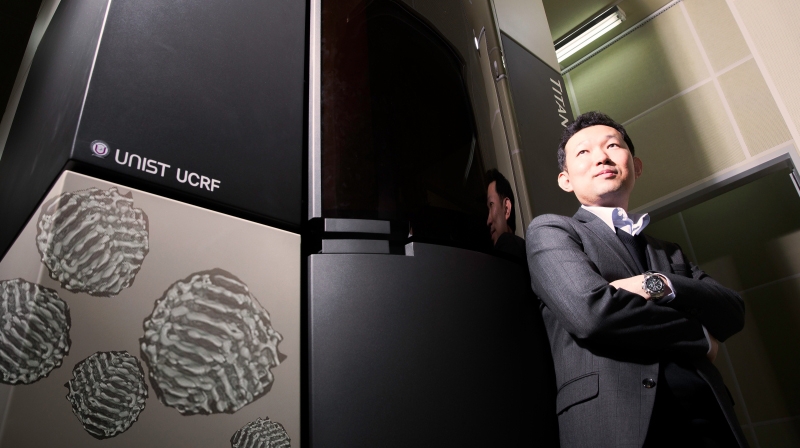 Prof. Kwanpyo Kim (School of Natural Science) is posing for a portait.

Nanoparticles are one of the basic building blocks for next generation materials. New research findings announced this week has brought new insight into the structural and mechanical properties of colloidal nanoparticles.

A multi-istitutional team of reseachers, affliated with UNIST report in the July 22 edition of Science that they have developed a new imaging technique, called SINGLE that provides the first atomic-scale images of colloidal nanoparticles.

According to the team, SINGLE, which stands for 3D Structure Identification of Nanoparticles by Graphene Liquid Cell Electron Microscopy, has been used to separately reconstruct the 3D structures of two individual platinum nanoparticles at near atomic resolution.”

In this study, the research team used the graphene liquid cell (GLC) and combimed it with high-resolution transmission electron microscopy (TEM), a direct electron detector (ED), and an algorithm for single-particle 3D reconstruction originally developed for analysis of biological molecules. The team reports, “Through this method, we were able to yield two 3D structures of individual platinum nanocrystals at near-atomic resolution.”

“Our results show that the SINGLE methodology can be applied directly to in situ 3D structural studies of many other kinds of solvated particles,” says Prof. Kim.

According to the team, “We envision that the next step for SINGLE is to investigate the structural principles underlying the assembly and transient morphology of any stable, small nanoparticle in solution.”