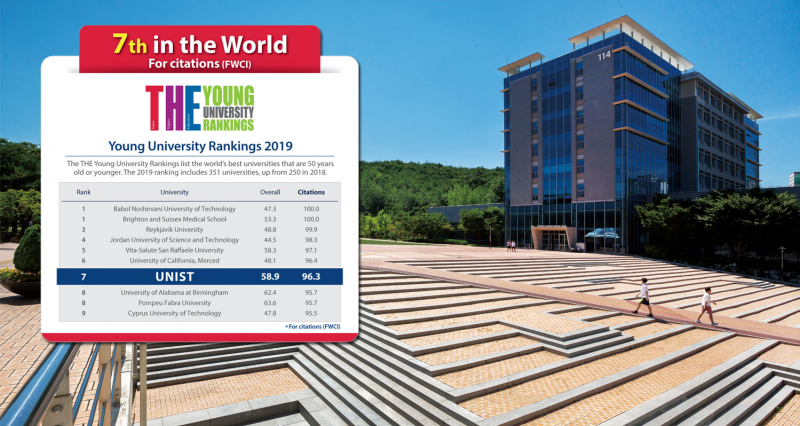 UNIST climbed to 20th place, up four places from its ranking last year, according to the 2019 THE Young University Rankings.

UNIST ranks 20th out of 351 participating universities from 60 countries, according to the 2019 THE Young University Rankings.

UNIST, in terms of citations, ranked 1st in South Korea and 7th in the world.

UNIST climbed to 20th place, up four places from its ranking last year, according to the 2019 London-based Times Higher Education Young University Rankings. Besides, when measured based on the number of citations a university’s research obtains, UNIST has risen to South Korea’s No. 1 university and 7th place in the world.

The THE Young University Rankings list the world’s best universities that are 50 years old or younger. The 2019 ranking includes 351 universities, up from 250 in 2018. The ranking, released on the 26th of June, is based on the same 13 carefully calibrated performance indicators as the flagship THE World University Rankings, but the weightings have been adjusted to give less weight to reputation. Those indicators cover the following fields: teaching (the learning environment; with a 30% weight) research (volume, income and reputation; 30%), citations (research influence; 30%), international outlook (staff, students, research collaboration; 7.5%) and the university’s relationship with industry (knowledge transfer; 2.5%).

In this comparison, UNIST obtained particularly high scores in the categories of “Citations” and “Industry Income” and demonstrated its research impact. The rankings also indicated that UNIST achieved an outstanding 23rd place in the category of “Research”, thus moving up seven places since last year. 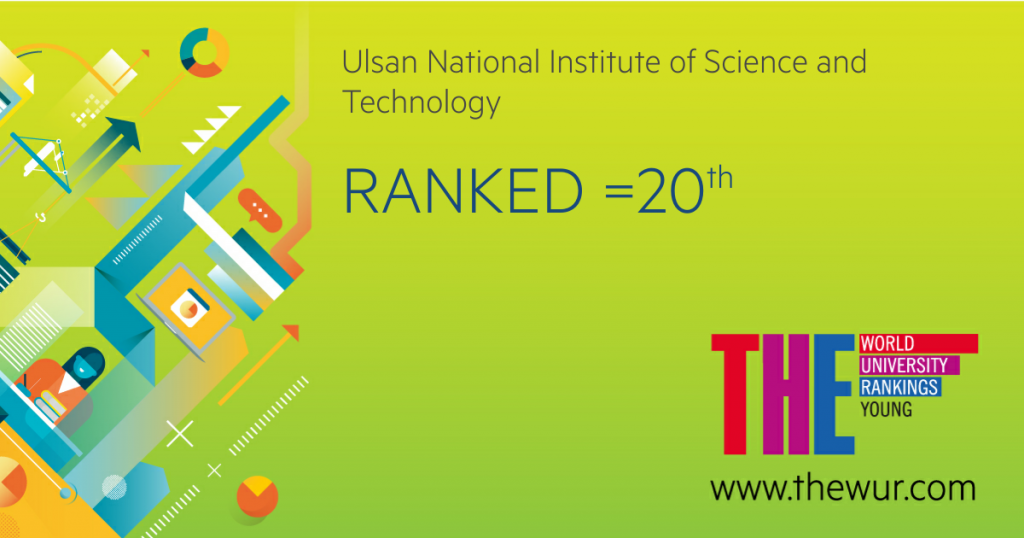 UNIST climbed to 20th place, up four places from its ranking last year, according to the 2019 THE Young University Rankings. l Image Credit: THE

According to the THE press release, Hong Kong University of Science and Technology has been ranked the world’s best young university for the second year in a row. École Polytechnique Fédérale de Lausanne from Switzerland, Nanyang Technological University from Singapore, and Paris Sciences et Lettres – PSL Research University Paris from France came in 2nd, 3rd, and 4th place, respectively. KAIST came in 6th place, while POSTECH remain in 8th place.

The driving force behind the success of UNIST is its state-of-the-art-research infrastructure, dedicated to support world-class research. The most representative case would be the UNIST Central Research Facilities (UCRF), which boasts cutting-edge equipment and professional manpower. The facility with 3 full-time faculty members and more than 50 operations specialists and equipment operators, has been actively contributing to advancing scientific and research capacity of UNIST.

“I am pleased that UNIST, which just celebrated its 10th birthday this year, has become known worldwide for its global competitiveness,” says President Mooyoung Jung, “This is largely due to our hard-working professors, students and staff.”