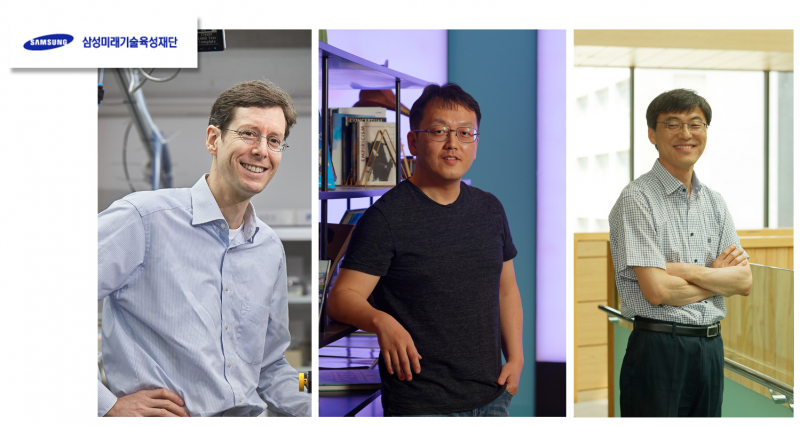 Above are the professors who have been selected for the first-half 2020 Samsung Research Funding Program for Future Technologies. From left are Professor Thomas Schultz (Basic Science), Professor Chol Park (Basic Science), and Professor Kyeong-Min Jeong (Materials Technology).

UNIST has been included in the list of Samsung's 2020 first half future technology fostering projects, released on June 4.

On June 4, Samsung announced that it selected a total of 28 research projects for the first half of this year, which includes 14 projects in the Basic Science, 8 projects in Materials Technology, and 6 projects in the field of Creative ICT. The selected projects will be supported through a research funding of 38.85 billion KRW.

UNIST researchers have been consistently chosen by Samsung Electronics to develop innovative futuristic technologies in the past. This year, two projects were chosen in the field of basic science, including the studies by Professor Thomas Schultz (Department of Chemistry, School of Natural Sciences) and Professor Chol Park (Department of Mathmetical Sciences, School of Natural Sciences).

Professor Thomas Schultz has been selected for proposing the study on the ‘Assessment on structural characteristics of heterogeneous molecular samples, using the multi-dimensional laser spectroscopy.’ Through the use of lasers, he plans to reveal the structure and composition of interstellar matter, floating around in space between stars. This study by Professor Schultz stood out among many other outstanding basic science projects and has also appeared in the media, including Chosun Media.

As for the materials technology, Professor Kyeong-Min Jeong‘s project on next-generation batteries has been selected. Professor Jung’s team will be carrying out research into the creation of ‘Electrode design and element technologies for the mass production model of 1000Wh/L lithium metal battery systems.’

Started in August 2013, this program has been promoted by the Samsung group in support of the cultivation of the core basic science technologies and for the three major areas of ▲ Basic Science, ▲ Materials Technologies, and ▲ Creative ICT. Based on those three major areas, the company selects the awarding of promising research projects on three separate occasions each year. A total of 589 projects have already been selected and about 750 billion KRW have been invested so far.