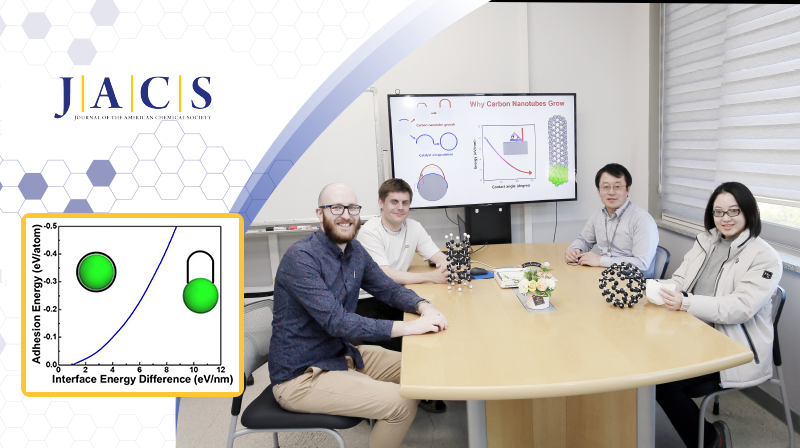 The work by Distinguished Professor Feng Ding at UNIST has been published in the prestigious Journal of the American Chemical Society (JACS).

Carbon nanotubes (CNTs), one-dimensional hollow cylinders of carbon far smaller than the human eye can see, have attracted worldwide scientific attention and extensive research efforts since their discovery three decades ago. Their remarkable properties are highly desirable for application in next-generation electronics. However, the most fundamental question regarding CNTs, why do CNTs grow, has never been answered since its discovery in 1991.

Figure 1. Two possible routes considered for the evolution of a graphitic cap structure on the catalyst nanoparticle surface: (I) catalyst encapsulation and (II) graphitic cap lift off and CNT growth.

Recently, Distinguished Professor Feng Ding, and his colleagues from the Center for Multidimensional Carbon Materials (CMCM), within the Institute for Basic Science (IBS) at UNIST, in cooperation with researchers at the Shanxi University of Science & Technology, Jiangsu University, and the University of Newcastle, have developed and validated a theoretical model to solve this three-decade-old mystery of why CNTs grow. Using state-of-the-art density functional theory (DFT) calculations, they demonstrate that the contact angle a carbon cap makes with the catalyst surface significantly influences the stability of the carbon-catalyst interface. As the contact angle approaches 90°, it becomes increasingly energetically favorable for a graphitic cap to lift off the surface to form a CNT rather than remain adhered to it, as the interface energy difference between an adhered graphitic cap and a lifted cap increases, overcoming the adhesion between the carbon and the catalyst.

The theoretical model proposed in this work explains why CNTs grow and can predict whether growth is favorable or not for any catalyst surface based on the strength of adhesion between carbon and the catalyst and the contact angle-dependent interface energy. Figure 2 demonstrates this key relationship, providing a fundamental understanding of why CNTs grow for the first time and can be used to effectively design catalysts for selective CNT growth. Figure 2. The key criteria for CNT growth over catalyst encapsulation; a sufficient interface energy difference to overcome the adhesion between the carbon and the catalyst.

The authors validate their theory with extensive DFT calculations and molecular dynamics (MD) simulations, that demonstrate excellent agreement. This important work reveals a historically overlooked yet fundamental aspect of CNT growth that has puzzled the materials science community for three decades. This work has been led by Distinguished Professor Feng Ding and co-first authored by Dr. Li Ping Ding, Dr. Ben McLean, and Dr. Ziwei Xu. It has been published in the March 2022 issue of the prestigious Journal of the American Chemical Society (JACS).