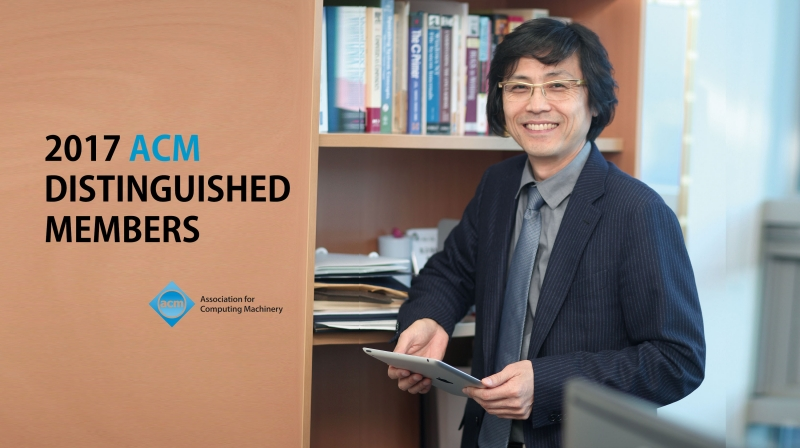 Sam H. Noh, Professor and Dean of Electrical and Computer Engineering at UNIST, has been honored as a Distinguished Member of the Association for Computing Machinery (ACM) in recognition of his individual contributions to advancing the field of computing. Among the 43 professionals named to the 2017 cohort, Professor Noh is the only Korean.

ACM, the Association for Computing Machinery, is the world’s largest educational and scientific computing society. Initiated in 2006, the ACM Distinguished Member Recognition Program annually recognizes up to 10% of its worldwide top members with at least 15 years of professional experience who have made significant accomplishments or impact on the computing field.

As noted by ACM President Vicki L. Hanson, “Computing technology is becoming an increasingly dominant force in our daily lives and is transforming society at every level.” She adds, “In naming a new roster of Distinguished Members each year, ACM underscores that the innovations which improve our lives do not come about by accident, but rather are the result of the hard work, inspiration and creativity of leading professionals in the field.”

Professor Sam H. Noh is a prominent scientist in system software and data storage technology. Besides being appointed as Editor-in-Chief of the ACM Transaction of Storage (ToS) in 2016, he has been contributing greatly to the academic vitality of the computing field.

“I am extremely happy to be selected by ACM for this great honor that recognizes my contributions to the field of computing,” says Professor Noh. “Receiving this recognition is a great honor, as this is a very rare case for a Korean to be named as ACM Fellows or ACM Distinguished Members.”

Professor Noh received the B.S. degree in computer engineering from Seoul National University and the Ph.D. degree in computer science from University of Maryland. He joined the School of Electrical and Computer Engineering at UNIST in 2015. Prior to joining UNIST, Professor Noh worked at George Washington University and Hongik University for the last 22 years. He currently serves as the Dean of Electrical and Computer Engineering at UNIST. His research interests include operating system issues pertaining to embedded/computer systems with a focus on the use of new memory technologies, such as flash memory and persistent memory.

A complete list of 2017 ACM Distinguished Members can be found HERE.