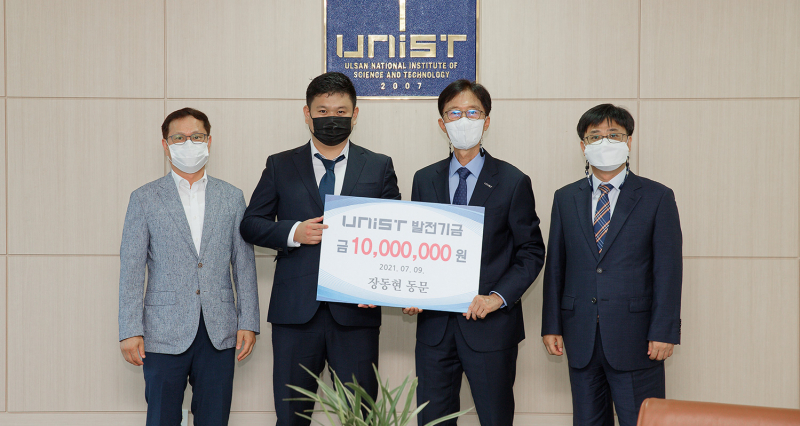 On July 9, UNIST has announced that it has received a KRW 10 million endowment from its alumnus, Dong Hyun Chang who is also a young entrepreneur of impressive business attainments. The endowment presentation ceremony took place in the Main Administration Building of UNIST.

Mr. Chang entered UNIST, as an undergraduate student in 2009 and attended the Department of Design and Human Engineering. He has also served as the second President of the Student Council of UNIST in 2012. Mr. Chang landed a career in the startup industry by first starting a social venture in 2016.

Having been engaged in various entrepreneurial activities, Mr. Chang took on a new challenge in 2017. He joined Limese, an e-commerce site dedicated to selling K-beauty in India, as a founding member. Being in charge of managing the company’s main office in S. Korea, he grew the company by taking on various tasks, such as business planning and organization management.

Limese has succeeded in securing KRW1 billion seed funding from Kakao Ventures in 2018. Besides, in 2019, the company has made the cut to join the NIVEA Accelerator (NX), the beauty accelerator program of Beiersdorf, a worldwide leader in skincare.

Mr. Chang has returned to Korea after successfully exited his investments from his recent business in India. Prior to starting a new business, he visited was UNIST not only to share his support for his alma mater but also to complete his schooling at UNIST. Having left UNIST in 2019 after his period of leave of absence expired, he now plans to continue his studies after re-entering UNIST in the coming second semester.