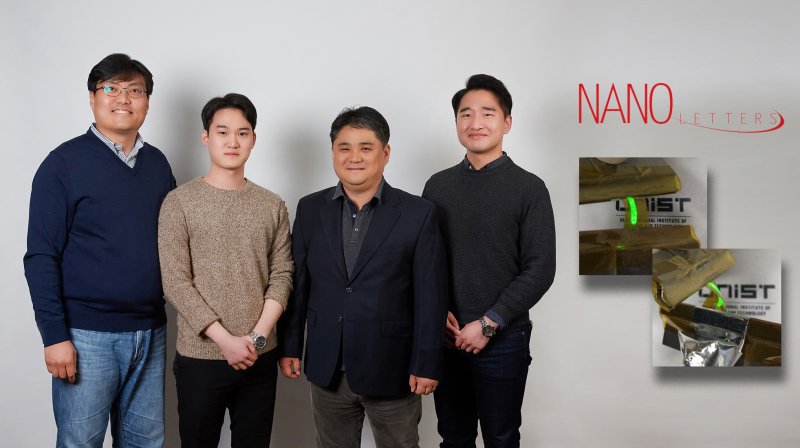 Their findings have been published in the January 2019 edition of Nano Letters.

A recent study, including researchers with UNIST has presented a new perovskite light-emitting diodes (PeLEDs) with high flexibility. Thanks to their invention, we will soon achieve the industry’s long-standing goal of delivering a foldable display with high color purity.

This breakthrough has been jointly led by Professor Myoung Hoon Song and Professor Ju-Young Kim in the School of Materials Science and Engineering at UNIST.

▲ Above video demonstrates the flexibility of PeLEDs. It can be seen that both sides of the device exhibit luminescence.

A perovskite LED is a type of light emitting diodes (LEDs) that emit light when an electric current flows through it. They use perovskite materials as the active layer in LEDs, thus exhibit better electron mobility and high color purity. Despite the many advantages, PeLEDs lack both the flexibility and transparency due to the limitations associated with metal electrodes.

In this study, the research team utilized flexible and transparent electrodes that are made of silver nanowires (AgNWs), as well as conductive polymers. In addition, they introduced polyelectrolytes to allow electrons to flow freely through them, thereby enhancing the overall device performance. As a result, the newly-fabricated PeLEDs were highly flexible and exhibited 50% transparency (semitransparency) and maintained 80% of their initial luminance even after being bent for 400 cycles at an rb of 2.5 mm.

“The curvature of the perovskite LEDs describes the degree of deflection or warpage without sacrificing their performance,” says Sang Yun Lee in the Combined MS/PhD program of Materials Science and Engineering at UNIST, the first co-author of the study. “The smaller the radius, the greater is the flexibility of the material. An rb of 2.5 mm is enough to keep the performance even if folded in half.” 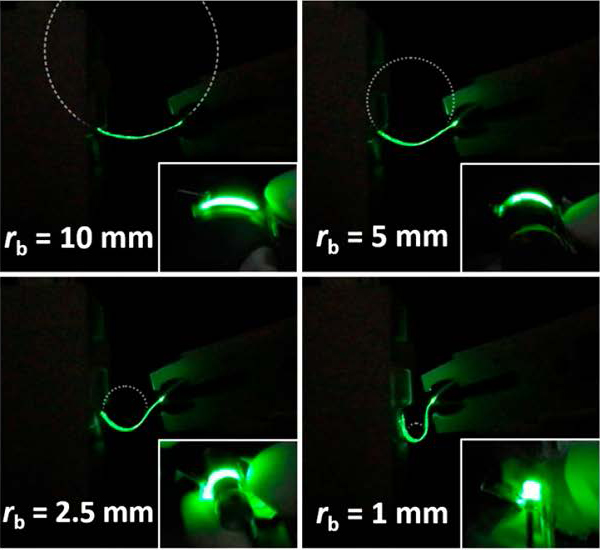 Side-view images of emissive the perovskite LEDs with different radius.

“The new measuring technique enables the evaluation of flexibility, using the elastic limitation of the perovskite LEDs, thereby providing accurate analysis of the influence factors affecting the device performance,” says Dr. Si-hoon Kim, the co-first author of the study. “Apart from PeLEDs, the new method can be also applied to other multi-layered flexible devices.”

“Organic–inorganic hybrid perovskites have been investigated extensively for use in perovskite-based solar cells and light-emitting diodes (LEDs) due to their excellent electrical and optical properties,” says Professor Song. “As this study provides solutions to the issues related to the flexibility and transparency of PeLEDs, we expect that the technology can be used in various fields.”

The findings of their work have been published online in the January 15, 2019 issue of Nano Letters, which is a top tier journal in the field of nanotechnology. This study has been financially supported by the Mid-Career Research Program of the Korean Ministry of Science and ICT (MSIT), by the ERC program via the Innovative Process Design Center for Strategic Structural Materials (Director Heung Nam Han, Seoul National University), by the Global Frontier R&D Program via the Center for Multiscale Energy System (Director Mansoo Choi, Seoul National University), and by the UNIST-Samsung Display Co. OLED center (Director Franklin Bien, UNIST).