Their research findings, published in the January issue of the journal Energy & Environmental Science (EES).

A team of researchers, affiliated with UNIST has recently announced that they have successfully developed a new way to increase energy efficiency of metal-air batteries which are next-generation energy devices by using a conducting polymer.

This breakthrough research, led by Professor Hyun-Kon Song and Professor Guntae Kim of Energy and Chemical Engineering is appeared in the January issue of Energy & Environmental Science (EES), a world renowned academic journal in the field of energy.

In the cathode of metal-air batteries or fuel cells, oxygen is reduced to metal oxide or water. At this time, catalysts are required to accelerate the reaction. As the well known catalyst, platinum has remaining economical issue to commercialize the metal-air betteries or fuel cell due to its high price. 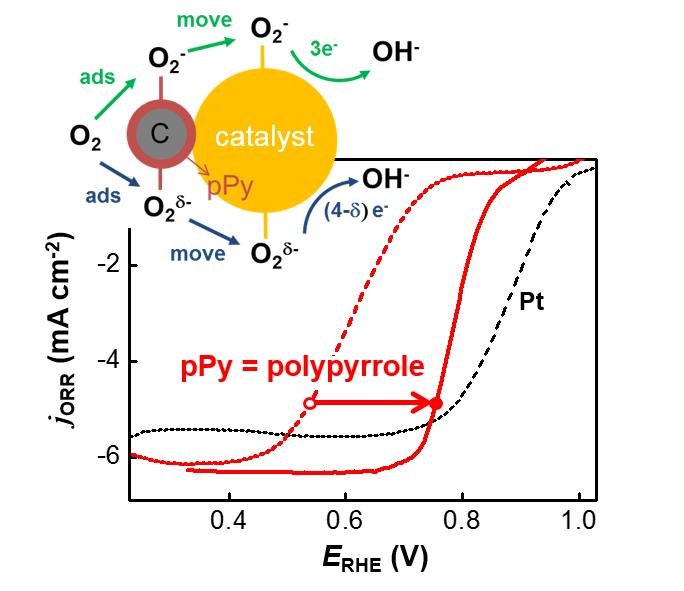 The oxygen reduction reaction at the anode of the cell is divided into four stages. The first step, which is the slowest, involves the addition of polypyrol to improve the catalytic reaction.

In the study, they reported that catalytic activity of provskite which can be substitute to platinum was dramatically enhanced by simply adding a kind of conducting polymer, polypyrrole and its principle.

“The reaction which oxygen receive electron is oxygen reduction. The property of polypyrrole which is sensitive to oxygen contribute to accelerate this reaction,” says Professor Song.

“Because the oxide-polypyrrole complex is made by simple operation, the catalyst will be proper to apply next-generation energy devices,” says Dong-Gyu Lee, the first author of the research.

The results of this study has been supported by KEIT, KETEP, BK21Plus and MSIP.