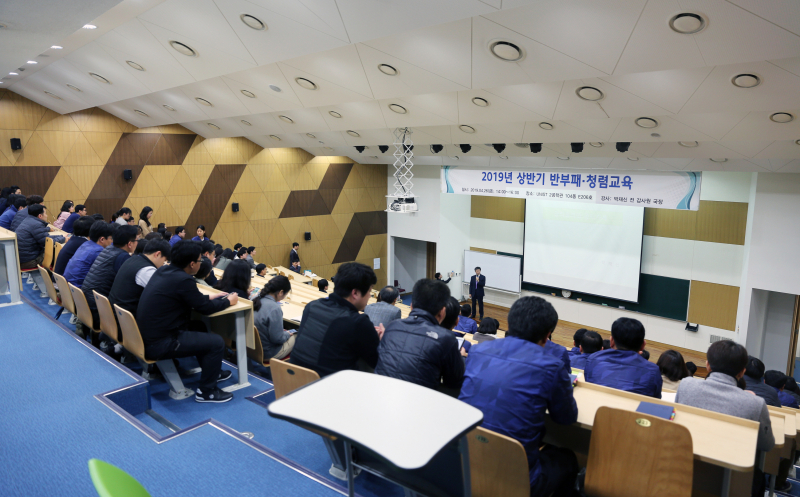 The first half of 2019 ‘Anti-Corruption and Integrity Education’ Lecture took place at UNIST on April 27, 2019.

UNIST to Hold a Special Lecture on Anti-Corruption and Integrity

A special lecture on anti-corruption and integrity was held in the lecture theatre of Engineering Building (104) at UNIST on April 26, 2019.

The first half of 2019 ‘Anti-Corruption and Integrity Education’ Lecture took place, with Former General Manager JaeShin Park of the Board of Audit and Inspection of Korea, as the guest speaker. The lecture was aimed at raising awareness of the importance of ethics and integrity in both the workplace and in the classroom.

JaeShin Park served as general manager at the Board of Audit and Inspection of Korea for more than 30 years and retired in 2015. Since then, he has been conducting education on the theme of anti-corruption and integrity for the public officials. In 2017, he has also published a book entitled, “Society, which lost its morals, is being monitored or under surveillance.”

The lecture consisted of three parts: △ The Roles and Responsibilities of Public Officials △ Guidelines for the Prevention of Corruption △ Anti Graft Law and Code of Ethics. Through the lecture, he also emphasized the morality and ethics, required of a public official and talked about various case studies on corruption and graft at the time he served as director general at the Board of Audit and Inspection of Korea.

“UNIST plans to continue the ongoing special lecture on anti-corruption integrity,” says Soong Rok Oh from Audit Office of UNIST. “We hope this lecture will bring good ethics and ethical behavior to both the workplace and in the classroom.”