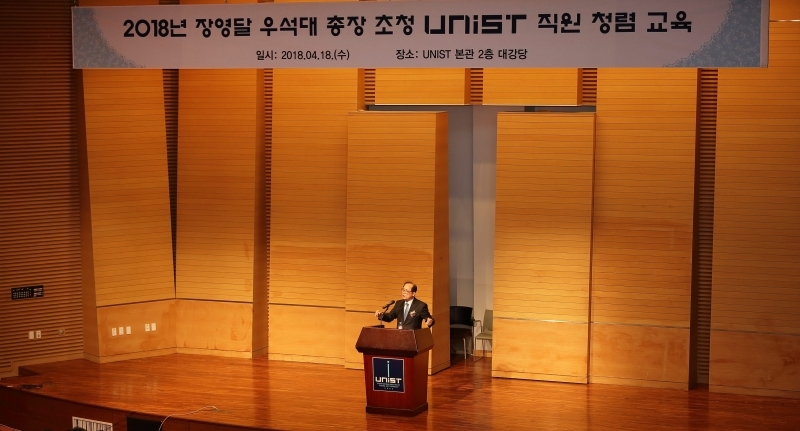 President Young Dal Jang of Woosuk Unviersity is delievering a special lecture on "Justice and the Future of Youth".

UNIST to Organize a Guest Lecture on Integrity at Work

President of Woosuk University visits UNIST to deliever a special lecture on "Justice and the Future of Youth".

On April 18, UNIST organized a guest lecture to improve integrity in the workplace. The guest lecturer of the day was President Young Dal Jang of Woosuk University. This session took place in the auditorium of the Main Administration Building at UNIST.

The event was attended by an audience of over 3oo faculty and staff members at UNIST. In the lecture, President Jang presented on the topic of “Movie 1987: Justice and the Future of Youth”.

UNIST has been organizing a series of informative lectures to raise awareness of the importance of ethical behavior in the workplace. Invited speakers include Seung-Heon Han, the former Head of the Board of Audit and Inspection of Korea, Sung-Chil Hong, the former Vice Chairman of Anti-Corruption & Civil Rights Commission.

“UNIST recognizes the importance of helping its faculty and staff members develop a sense of integrity regarding their work,” says Auditor Sung Euk Lee of UNIST. “We hope that this meting will be a great help to UNIST in promoting integrity in the academic workforce.”