Home All News People “UNIST Will Leap Forward to Be Ranked among World’s Top 100 by 2027!” 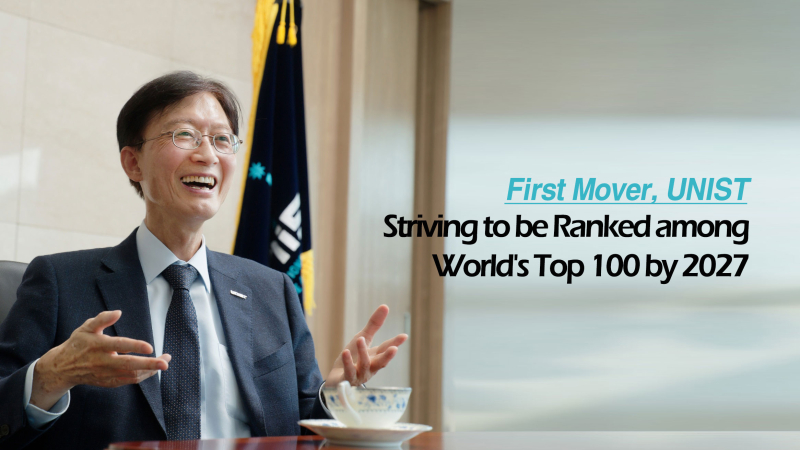 By 2027, UNIST will leap forward to become one of the world’s top 100 research-oriented universities!

On November 23, President Yong Hoon Lee held a press conference on the occasion of the third anniversary of his inauguration for a discussion on the past achievements and the future goals of UNIST. |

“Scientific breakthroughs and influential innovations that will change the world come from research-oriented universities, and our goal is to become ‘First Mover‘ of the kind,” said President Lee. “We will leap forward to become a world-class research university, both in name and reality, by entering the top 100 in the world within five years.”

This year, UNIST entered the top 100 universities of the international rankings (THE No. 174, QS No. 197), and also settled in the top ranks (No. 5, No. 6) among domestic universities. Besides, UNIST has been ranked No. 11 worldwide and No. 1 in South Korea by the Times Higher Education Young University Rankings 2022.

“UNIST is working tirelessly to secure ‘First Mover DNA‘ in all fields including, but not limited to research, education, and international cooperation,” said President Lee. “Through this, we will also produce concrete results, like ‘Nobel Prize-quality scientific discoveries‘ and ‘Global innovative companies, like Google.‘ President Yong Hoon Lee held a press conference on the occasion of the third anniversary of his inauguration in Ulsan to discuss the past achievements and the future goals of UNIST. | Image Credit: Kyoungchae Kim

Concrete measures to be taken, for the purpose of strengthening UNIST’s international research capabilities, will include the running of the ‘UNIST President’s Advisory Council,’ composed of presidents of major universities and respected scholars whose work is deemed to be of Nobel class. This will include, but not be limited to, expanding international joint research programs, as well as overseas dispatch of researchers.

President Lee also expressed his thoughts on the accomplishments that driven regional innovation and growth over the past three years. He explained, “Since taking office in November 2019, have worked steadily towards fostering four key strategic technologies: AI, carbon neutrality, semiconductors, and biomedical sciences.” He added, “Based on this, UNIST has been playing a pivotal role in shaping the future as a global innovation hub for science and technology, leading change in the southeastern region of Korea, beyond Ulsan.”

Much effort has also been put into transforming Ulsan, a traditional manufacturing city, into an AI-based high-tech industrial city through the AI Graduate School and AI Innovation Park, which opened in 2020. Furthermore, UNIST has been contributing to helping the chemical companies in Ulsan to transform their performance and refocus their efforts on high-growth segments, such as the next-generation semiconductor materials parts. “We also plan on building the Energy Demonstration Park (name tentative) to foster Ulsan region as a global center of renewable energy,” said President Lee. “Additionally, we will lay the foundation for Ulsan to grow into a high-tech mecca in the smart healthcare industry through establishing the Medical School in 2023 and accelerating research and startups in the biomedical sector.”

“UNIST strives to serve as a magnet, attracting and retaining the right people and companies, and driving technological innovations for regional growth,” said President Lee. “In response to such efforts, Duksan Group Chairman Junho Lee pledged a contribution of KRW 30 billion towards the endowment fund of UNIST and this will become a representative mutual growth model, demonstrating linkage and cooperation among local governments, universities, and enterprises.”

The money donated by Duksan Group will be used to establish the UNIST Challenge Convergence Building (name tentative), which will serve as a cradle of global startup talents. Construction will start in early 2023 and will be completed by the end of 2026. Meanwhile, UNIST has produced a total of 145 professors and student start-ups since its opening, and the market value is estimated to be more than 1 trillion won.

“While in office, I emphasized to shift the university from “doing well” to excelling at the “things that must be done,” and I am confident that it has been well-executed as planned,” added President Lee. “UNIST’s remarkable growth to this day would not have been possible without support from Ulsan city, local citizens, and the effort and dedication from all the members of UNIST.” “If only half of the talents entering UNIST can remain in Ulsan each year, the future of Ulsan can change dramatically,” said President Lee. “We will focus our attention and support on research, education, organizational culture, and campus environment so that the best talents can stay at the university.”

“This fall, we also renovated our library into a multi-purpose cultural space for local citizens to stop by for lectures or hold meetings,” said President Lee. “I hope this will become a go-to place for those who visits UNIST.”