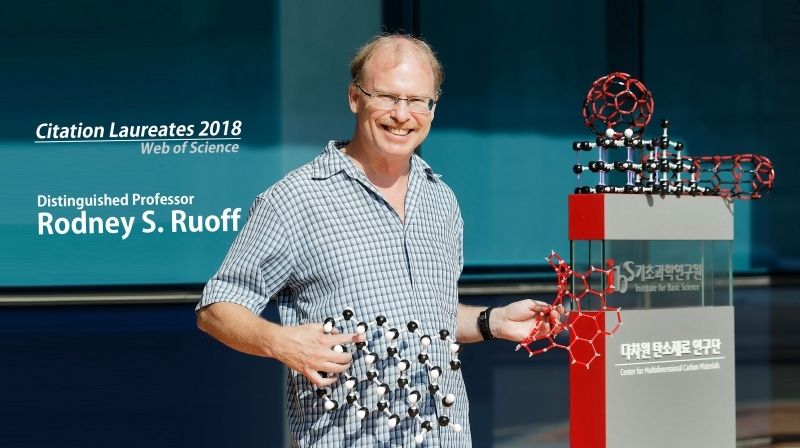 Rodney S. Ruoff, Director of the Center for Multidimensional Carbon Materials (CMCM) at the Institute for Basic Science (IBS) and Distinguished Professor in the School of Natural Science at UNIST.

Rodney S. Ruoff, Director of the Center for Multidimensional Carbon Materials (CMCM) at the Institute for Basic Science (IBS) and Distinguished Professor in the School of Natural Science at UNIST, was selected to the 2018 hall of Citation Laureates on September 20, 2018. Announced each year by Clarivate Analytics, this designation celebrates researchers whose influence is comparable to that of Nobel Prize recipients, as attested by exceptionally high citation records within the Web of Science.

Since 2002, analysts at Clarivate Analytics (formely Thomson Reuters) have drawn on Web of Science publication and citation data to identify Nobel-worthy researchers in physiology, medicine, physics and chemistry, as well as economics. The Citation Laureates are scientists whose publications have been cited so often by their colleagues that they are forecast as potential recipients of the Nobel Prize in this year or in the future. In this year’s projections, Clarivate Analytics has selected 17 top-tier scientists as potential prize winners and Distinguished Professor Ruoff is the only researcher, affiliated with a Korean research institution.

Distinguished Professor Ruoff has been given the honor of being designated as a probable winner of the physics prize for his profound contributions to our “understanding and development of carbon-based materials including for capacitive energy storage and understanding the mechanisms of operation of supercapacitors.” ▲ Distinguished Professor Rodney S. Ruoff, who has been named as possible Nobel Prize winner, is holding a carbon atomic model.

“I am deeply honored to be included in the list and would like to note the hard work and dedication from many students and postdocs who have worked in my group, as well as from the colleagues that I have been fortunate to collaborate with,” Distinguished Professor Ruoff said in an interview about his inclusion on this year’s list. “Korea has been an exciting and dynamic experience for me and it has furthermore been a real pleasure working for UNIST and witness my affiliation to grow and do well.”

Distinguished Professor Ruoff has made pioneering discoveries in carbon science for more than 20 years. For his contributions to the fields of graphene and other carbon materials, he has received numerous prizes and awards. In 2014, Distinguished Professor Ruoff was awarded the David Turnbull Lectureship Award, one of most significant awards from the Materials Research Society, which honors a scientist’s significant contributions to understanding fundamental materials phenomena and properties. Besides, in 2016, he received the SGL Carbon (Skakel) Award for his outstanding and many contributions to the field of carbon materials. Distinguished Professor Ruoff has also co-authored over 440 peer-reviewed publications related to chemistry, physics, materials science, mechanics, and biomedical science.

More recently, he has published a series of studies on graphene-based materials, developing new synthesis techniques and improving our understanding of the physical, chemical, and biological properties of these materials. His extensive studies of the growth of graphene by chemical vapor deposition and of the chemistry and uses of graphene oxide (such as in polymer composites, in electrodes, in thin films, in ‘paper-like’ materials) and for use in electrical energy storage triggered an extraordinary surge in research studies worldwide. As one example, his work with his team on graphene-based ultracapacitors, published in Nano Letters in 2008 (a total of 6,431 citations), has initiated a worldwide effort on the use of graphene materials in electrodes in electrical energy storage systems. Clarivate Analytics is the global leader in providing trusted insights and analytics to enable researchers to accelerate discovery. Again this year, it has revealed  a new class of top-tier scientists whose research has been cited at high frequency – with papers typically in the top 0.01% globally most-cited – and whose contribution to science has been transformative, even revolutionary, as they join the hall of 2018 Citation Laureates and take their place among the world-class of global researchers. The forecast is based mainly on citations of published scientific literature, but has proved a reasonable predictor of future Nobel fame, having forecast 37 Nobel winners since the list began in 2002. The Citation Laureates need not get their Nobel in the same year that they are named to the list.

“The research impact of South Korea has rapidly increased over the decades, and is now starting to unveil its world-class research,” says Justin Kim, Country Director of Clarivate Analytics, South Korea. “We look forward to seeing more emerging research fields and Korea’s growing influence and contribution to global research.”

This year, 11 of the 17 honorees are based at leading North American academic institutions and others come from the UK, France, Germany, Spain, Japan and South Korea. For detailed information on the methodology of the citation study and this year’s Citation Laureates and their fields of research and institutional affiliations, please visit: https://clarivate.com/2017-citation-laureates/

The 2018 Citation Laureates are as follows: Physiology or Medicine
Napoleone Ferrara, University of California, San Diego, CA, for the discovery of vascular endothelial growth factor (VEGF), a key regulator of angiogenesis, the process in which new blood vessels are formed, both in healthy tissue and in cancerous cells. Ferrera’s work has led to the development of drugs that inhibit blood-vessel growth in cancer and in blinding eye disorders such as age-related macular degeneration. Minoru Kanehisa, Kyoto University, Kyoto, Japan, for contributions to bioinformatics, specifically for his development of the Kyoto Encyclopedia of Genes and Genomes (KEGG). This database of protein pathways involved in gene expression allows genomicists and other researchers to collect, compare, and interpret data on cellular processes – for example, those that underlie disease. Solomon H. Snyder, Johns Hopkins University, Baltimore, MD, for his identification of receptors for many neurotransmitters and psychotropic agents, including brain receptors associated with opiates. His insights have been applied in the development of many common prescription drugs, such as compounds for pain control.

Physics
David Awschalom, University of Chicago, IL, and Arthur C. Gossard, University of California, Santa Barbara, CA, for observation of the spin Hall effect in semiconductors. This insight into how electrons behave under the influence of magnetic fields promises application in many areas, including quantum computing. Sandra M. Faber, University of California, Santa Cruz, CA, for pioneering methods to determine the age, size and distance of galaxies and for other contributions to cosmology, including work on the “cold dark matter” believed to constitute the universe’s “missing” matter. Yury Gogotsi, Drexel University, Philadelphia, PA, Rodney S. Ruoff, IBS CMCM Center and Ulsan National Institute of Science and Technology, South Korea, and Patrice Simon, Université Paul Sabatier Toulouse III – CNRS, Toulouse, France, for discoveries advancing the understanding and development of carbon-based materials including for capacitive energy storage and understanding the mechanisms of operation of supercapacitors.

Chemistry
Eric N. Jacobsen, Harvard University, Cambridge, MA, for contributions to catalytic reactions for organic synthesis, especially for the development of Jacobsen epoxidation. George M. Sheldrick, Georg-August-Universitat Gottingen, for his enormous influence in structural crystallography through the introduction and maintenance of the SHELX system of computer programs. JoAnne Stubbe, MIT, Cambridge, MA, for her discovery that ribonucleotide reductases transform ribonucleotides into deoxyribonucleotides by a free-radical mechanism. These deoxyribonucleotides, in turn, are fundamental to the synthesis and repair of DNA.

Economics
Manuel Arellano, CEMFI, Madrid, Spain, and Stephen R. Bond, Oxford University, UK, for contributions to panel data analysis, especially the Arellano-Bond estimator. This method exploits time patterns in panel data to estimate the economic response to a change in a policy or other variable, while controlling for permanent unobserved confounding variation. Wesley M. Cohen, Duke University, Durham, NC, and Daniel A. Levinthal, University of Pennsylvania, Philadelphia, PA, for their introduction and development of the concept of absorptive capacity (i.e., the ability of firms to evaluate, assimilate, and apply external knowledge) and its contribution to advancing our understanding of the innovative performance of firms, industries and nations. David M. Kreps, Stanford University, Stanford, CA, for contributions to dynamic economic phenomena, in choice theory, finance, game theory, and organization theory.