The concert is scheduled to be held in in Kyungdong Hall, located in Main Admin. Bldg. of UNIST on Wed., December 11, 2019.

The Science Walden Center will be holding a concert, namely “Cantabile with Ggool” through the use of the new economic system, “feces Standard Money” or known as fSM.

The concert is scheduled to be held in Kyungdong Hall of Main Administration Building at UNIST on Wednesday, December 11, 2019. A special part of this concert is that the ticket can be only purchased with the fSM currency, called Googol (literally meaning ‘honey’ in Korean). The concert begins at 7:00 pm.

Feces Standard money (fSM) is an important theme pursued by the Science Walden Center. Science Walden team has been researching into fSM for the implementation of circular economy thorugh the economic and environmental dimensions. Through this alternative currency system, one can convert human feces into biogas, use that energy as a fuel for heating, and even receive a cash refund for that energy produced. This study of retrieving value in discarded materials has inspired many scientists and artists, thus a range of science-art fusion projects are also underway.

“Ggool, which can be produced via our everyday bowel movements, is a currency that can be obtained because we are humans,” says Director Jaeweon Cho of Science Walden. “Along with the study of converting human waste into renewable energy, Science Walden Center carries out an empirical study aimed at alternative economic and monetary systems through the implementation of fSM platform.”

After signing up for the fSM platform (http://fsm.network/), users will be automatically given 10 Ggool each day. This Ggool can be accumulated, but must be shared with the members through the platform and if not, they will disappear in the course of time. Ggool are non-materialized cash, thus are only distributed and circulated among the fSM platform users. 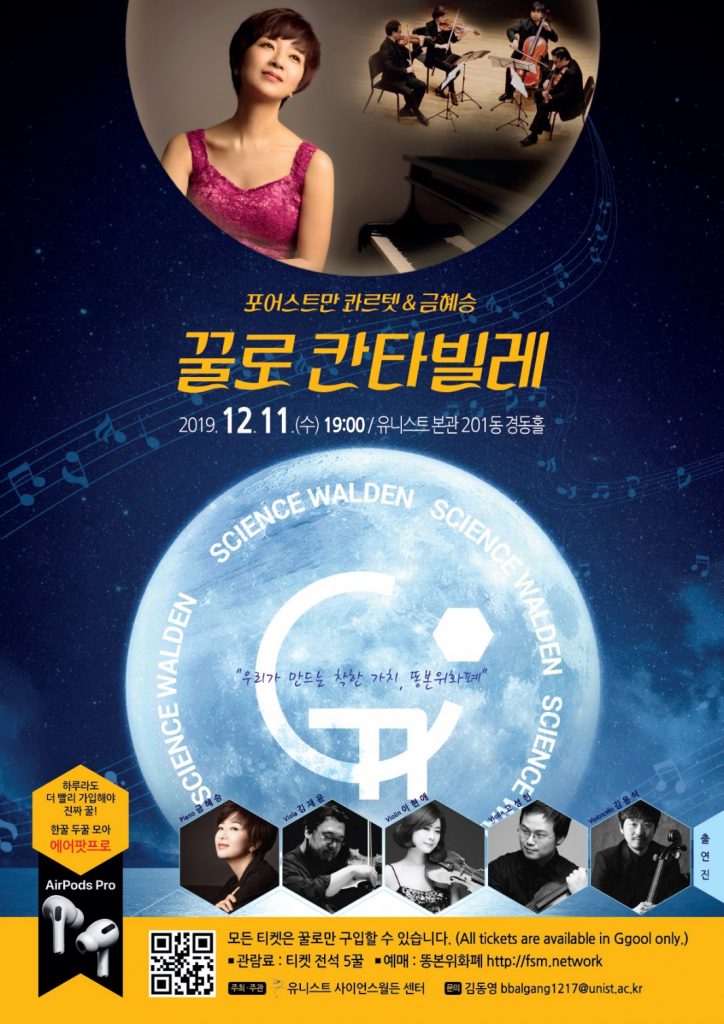 Those who wish to attend the concert may purchase the tickets with ‘Ggool‘ or send them to the performers, as a form of appreciation through the fSM platform.

With this concert, the Science Walden Center hopes to increase the user engagement for Ggool. The center has operated an unmanned booth selling fruits and small goods to promote the use of Ggool throughout the campus from December 3 to 5, 2019. It plans on operting this unmanned booth once again during the period between December 9 to 13, 2019.

About 10 offline stores in Guyoung or Cheonsang areas near UNIST took part in this endeavor, thus have prepared small goods and food products that can be purchased with Ggool through the fSM platform. Besides the concert, there will also be other fun events and plays offered on the platform.