From left are Professor Wonyoung Choe, Eunji Jin, In Seong Lee, and Professor Seung Kyu Min in the Department of Chemistry at UNIST.

This work has been published in Science Advances on May 10 2019.

A research team, led jointly by Professor Wonyoung Choe and Professor Seung Kyu Min in the School of Natural Science at Ulsan National Institute of Science and Technology (UNIST) has reported a highly flexible Metal-Organic Framework (MOF) with the NPR property. Such discovery is especially worthy of notice, because the NPR materials are potentially useful in applications such as shock absorbing materials, sensors and artificial muscles. This work has been published in Science Advances on May 10, 2019.

The origin of the counter-intuitive NPR properties is often attributed to internal structures, such as special tessellation patterns. In this study, Professor Choe and his research team succeeded in realizing such rotating cubes in molecular scale inside flexible MOF, UPF-1.

“The nature of NPR is not the component or size, but the arrangement of the internal structure that plays a key role,” says EunJi Jin in the doctoral program of Chemistry at UNIST, the first author of this study. “Herein, we incorporated rotating cube models that exhibit a negative poisson ratio (NPR) inside the self-assembled solids.” 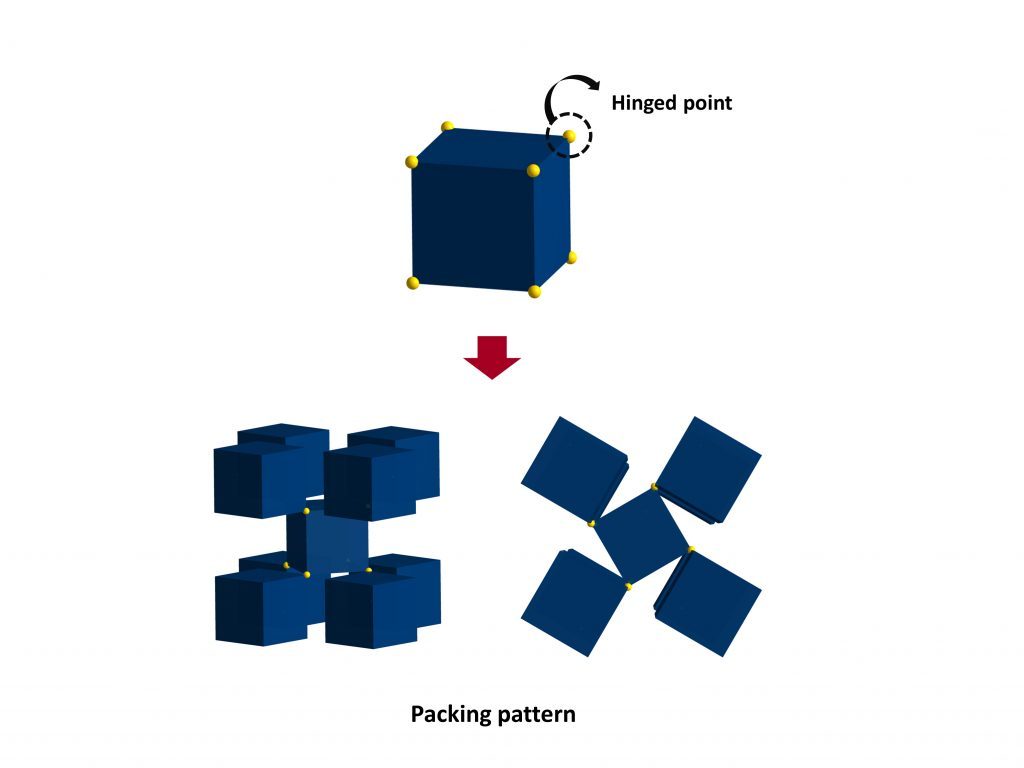 Description of UPF-1 structure. It rotates clockwise based on the hinged point (Zn─O─Zn).

The research team also identified the principle of NPR in the newly synthesized MOF (UPF-1). This material has a hinged point, responsible for the structural changes observed in UPF-1. The rotating mechanism from hinged squares is known to cause NPR behavior in materials. On the basis of this rotating mechanism, materials contract and expand, thus exhibiting the NPR property of UPF-1.

“Our work demonstrates that the topology of the framework and flexible hinges inside the structure are intimately related to the mechanical properties of the material, providing a guideline for the rational design of mechanically responsive metal-organic frameworks,” says EunJi Jin. 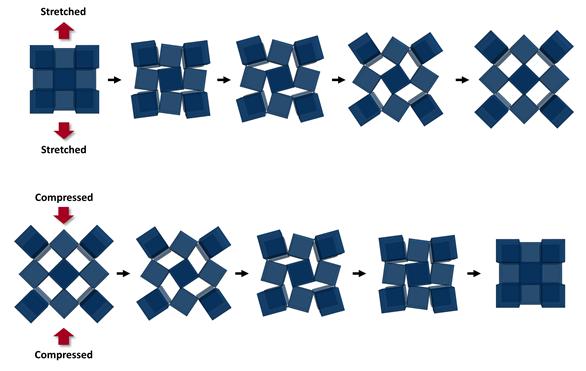 Schematic representation of rotating mechanism based on cube model.

Professor Seung Kyu Min and his research team in the School of Natural Science at UNIST jointly performed semiempirical calculations (DFTB) based on density function theory (DFT) to establish the NPR behavior of UPF-1. Their findings suggest that the poisson’s ratio of UPF-1 was close to a value of negative Poisson’s ratio (-1), thus the pressure shifted vertically in a direction, given pressure. This demonstrates the topology of UPF-1 is intimately related to its mechanical properties, suggesting that various metamaterial design strategies are possible for MOFs.

Metal–organic frameworks (MOFs) are created by assembling metal ions or clusters with organic molecules. The self-assembly process can lead to different ranges of structures, whose properties are defined primarily by pore size, shape, and chemical composition. According to the Cambridge Structural Database (CSD), more than 70,000 MOF structures have been designed and synthesised so far.

“One major discovery of this study is that out of 70,000 MOFs reported to date, certain structures can be the potential candidate materials with the NPR property,” says Professor Choi. “We expect new streams of NPR MOFs in the near future.”

This study has been participated by Professor Myung Soo Lah in the School of Natural Science at UNIST and Professor Woo-Dong Jang from Yonsei University. This research has been supported by Basic Science Research Program through the National Research Foundation of Korea (NRF) funded by the Ministry of Education (Korean SGER), as well as Science Research Center (SRC) and Global PhD Fellowship (GPF).