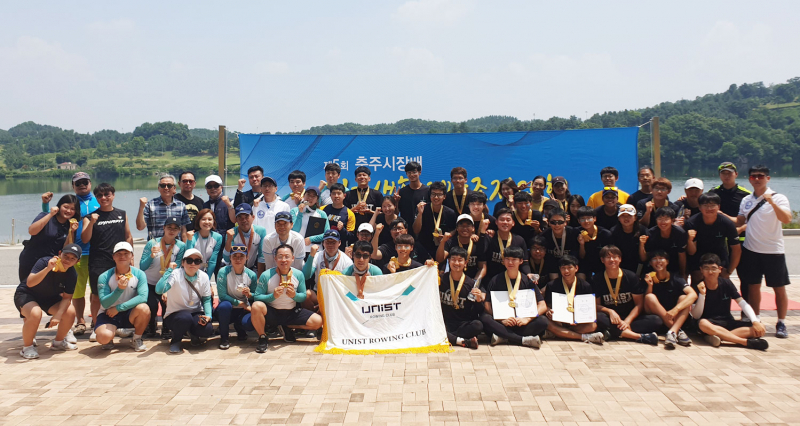 The rowers from high schools and universities throughout the nation, including UNIST were set to gather and compete at the 5th Chungju City Mayor’s Cup Rowing Competition from the 13th to the 14th of July 2019.

The competition, which took place at Chungju Tangeum Lake International Rowing Center, has been attended by amateur athletes and student-athlete’s from high schools, universities, and professional rowing clubs throughout the nation. More than 600 participants, including 23 university teams, participated and competed in the competition. A total of 12 events were held, including separate rowing events by men’s and women’s varsity 8+. In this two-day long rowing competition, UNIST won in the following events (Men’s College 8+, Men’s General 8+, Men’s General -160 4X+).

“Winning the championship in men’s college eight was largely due to the past 3 weeks of intense training,” says Seongbin An (School of Mechanical Aerospace and Nuclear Engineering) who won the Men’s College Eight. “We will try our best to achieve good grades in the 14th Inter-Universith Rowing Competition, which will take place two weeks from now.”

The UNIST Rowing Club is a registered sports club, consisting of 60 experienced university rowers and 20 faculty and staff members who love to row, have fun, and get some fantastic exercise. Established in 2013, the primary objectives of the club are to foster and promote the sport of rowing at all levels. In the student division, the club has won the overall title in 6 out of 7 competitions, including the past two championships, held in 2018. Besides, they won the Ministry of Oceans and Fisheries Award at the Jang Bogo Flag National Rowing Championship for the second consecutive year. In the general division, the club was also honored with the Ministry of Oceans and Fisheries Award in 2 out of 3 competitions, for the second consecutive year.

Meanwhile, UNIST Rowing Club plans on participating in the 100th National Sports Festival in the upcoming October, as a representative team of Ulsan city.