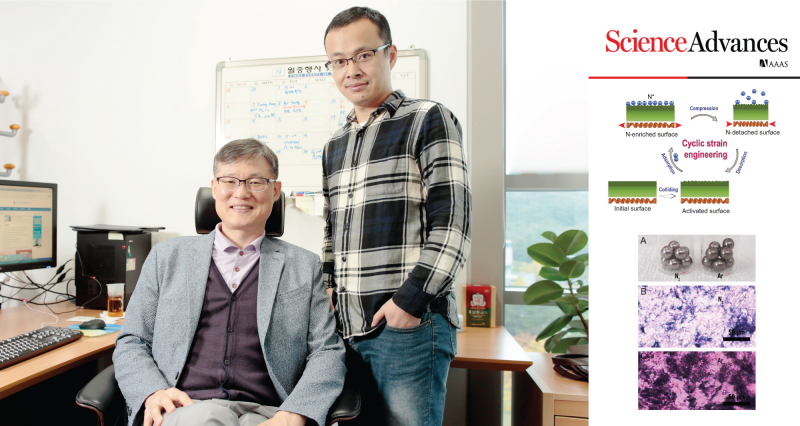 Their findings have been published in the online version of Science Advances on November 1, 2019.

Nitrogen doping has emerged as a way to compensate for the shortcomings of graphene, the so-called Dream Material. Through this process, nitrogen is intercalated between carbon layers, which gives the graphene better properties. Besides, with the introduction of a simple and effective method to perform nitrogen doping, which does not require both high pressure and high temperature, it has come into the spotlight, once again.

A research team, led by Professor Jong-Beom Baek in the School of Energy and Chemical Engineering at UNIST, has succeeded in easily dissociating nitrogen molecules (N2) under mild conditions via cyclic strain engineering. This was realized by a mechanochemical ball-milling method. The existing nitrogen doping method requires both high pressure and high temperature, but with the new method, carbon can be treated at low-temperature and low-pressure environment. This is due to the energy released from impact and attrition between the balls.

Graphene exhibits high electrical conductivity, yet being a gapless semiconductor, it has been impossible to control the band gap in graphene. Thus, having different types of band gaps is required to control the flow of electric current in electronic materials, like semiconductors. In order to compensate for such drawback, researchers have been working to develop a method for changing the electronic structure and electron transport in graphene by doping graphene with other materials. Nitrogen is the most well-studied dopant in graphene.

In order to dope nitrogen with graphene, the nitrogen moleculres (N₂) must be split into nitrogen atoms (N). However, nitrogen has a very strong bond between atoms, requiring a high temperature and high pressure environment such as vapor deposition or plasma decomposition. In addition, when doping nitrogen to graphene using this method, the content was only about 1%. Therefore, it is necessary to develop a process with simple reaction conditions while controlling nitrogen content at will. 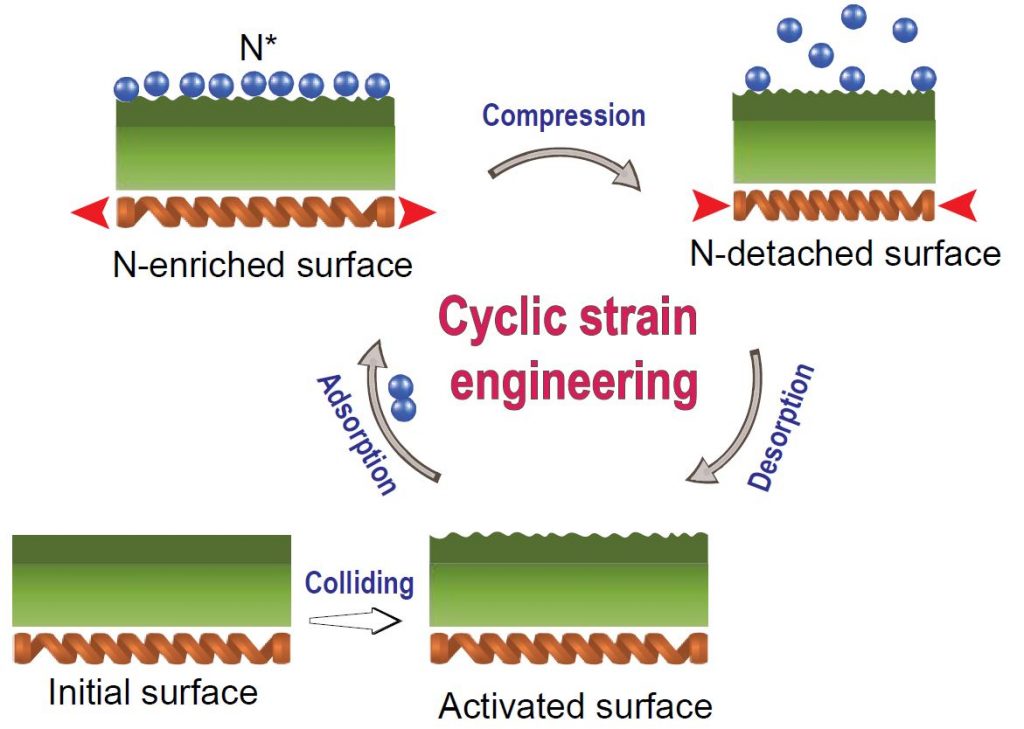 In the study, the team demonstrated that N2 can be easily dissociated under mild conditions via cyclic strain engineering. In the process, they used Fe balls to dope nitrogen under low-temperature and low-pressure environment. In brief, graphite, N2 gas, and Fe balls were loaded in a ball-mill container to produce energy.

When the barrel rotates, the steel balls collide with each other to activate the surface, and the energy generated is converted into elastic energy of the steel balls. This energy causes nitrogen gas to adhere to the surface of the temporarily expanded iron ball, which breaks down as the bonds between the nitrogen atoms break. When the expanded iron beads are compressed, the nitrogen on the surface drops off to an atomic state, and the graphene is doped with nitrogen. This reaction is repeated as the barrel rotates, allowing more nitrogen to be doped into the graphene.

Dr. Gao-Feng Han, who led the research as the first author, found the optimum conditions for doping nitrogen into graphene by adjusting the material, size, rotation speed and time of the iron beads. As a result, the normalized loading of N to C reached as high as 16.3 at a critical reaction pressure of less than 1 bar with temperatures of only 40°C.

“The method can produce N-doped carbon materials at both low pressure and low temperature, which is highly economical and suitable for mass production,” says Professor Baek. “Our finding may lead to opportunities for the direct synthesis of N-containing compounds from N2.”

The findings of this research have been first published in the online version of Science Advances on November 1, 2019. The study has been also jointly participated by Professor Qing Jiang and Xiang-Mei Shi from Jilin University in China.