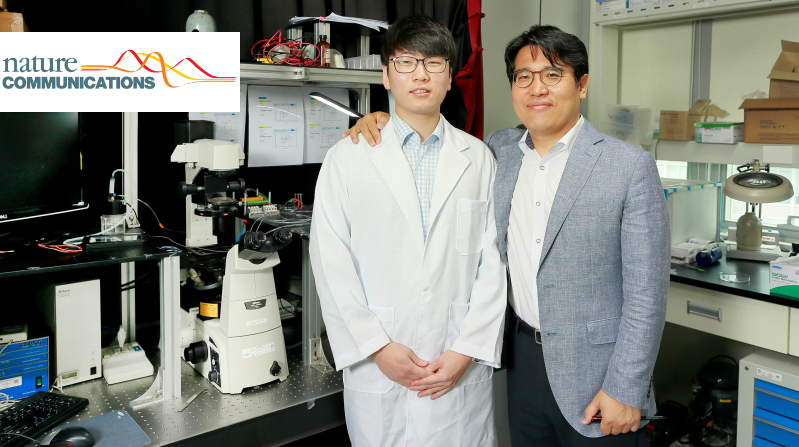 From left are Juyeol Bae and Professor Taesung Kim in the School of Mechanical Aerospace and Nunclear Engineering at UNIST.

Form as Casting Templates for Simple and Low-cost Nanopatterning

Their findings have been published in Nature Communications on July 19, 2019.

A new patterning technique based on the natural liquid foam systems, observed in soap, beer, and even embryogenesis, has been developed. Their findings provide a simple and low-cost patterning method for fabricating fine patterns on the substrates, used in semiconductors and flexible displays.

In the study, Professor Taesung Kim and his research team in the School of Mechanical Aerospace and Nuclear Engineering at UNIST, presented a simple and versatile microfluidic approach for controlling two-dimensional liquid foam, designing not only evaporative microholes for directed drainage to generate desired film networks without topological changes for the first time, but also microposts to pin the generated films at set positions.

Published in the August 2019 issue of Nature Communications, this will promotes the development of wearable devices that are difficult to manufacture with conventional electron beam lithography or photolithography methods.

Electron beam lithography (often abbreviated as e-beam lithography or EBL) is the preferred patterning method for product development. However, this approach is time-consuming and has a low output yield, in addition to the costly associated equipment and materials. To overcome these drawbacks, various patterning approaches, using liquid foams are currently being studied. Yet, their use has been limited due to their dynamic fluidity, complex topological changes, and physical characteristics of the closed system.

Professor Kim’s team focused on the bubble structure commonly found in nature and created an unprecedented system through microfluidic devices. The liquid mixed with the necessary material on the substrate is naturally evaporated through a microfluidic device to easily create a regularly connected two-dimensional pattern.

The natural foam is the “closed system,” in which active physical access to manipulate foam is unavailable. Besides, as a result of bubble merging through Ostwald ripening, it has been difficult to obtained well-ordered nanostructure patterns.

“To the best of our knowledge, we are the first to investigate the mechanism of open-cell 2D liquid foam and characterize the MNLP technique to shape various liquid film networks,” says Juyeol Bae in the doctoral program of Mechanical Aerospace and Nuclear Engineering at UNIST, the first author of the study. “Patterning materials in liquid is achievable using the thin films as nanoscale molds, which has additional potential through repeatable patterning on a substrate and combination with a lithographic technique.”

“In contrast to traditional lithography, the new technique has the advantage of transferring large-scale patterns onto flexible substrates,” says Professor Kim. “This technique provides novel means of nanofabrication superior to both lithographic and bottom-up state-of-the-art techniques.”

The findings of this study have been published online in the July 2019 issue of Nature Communications, a sister journal of Nature. This study has been supported by the National Research Foundation of Korea (NRF), funded by the Korean government (MSIT).