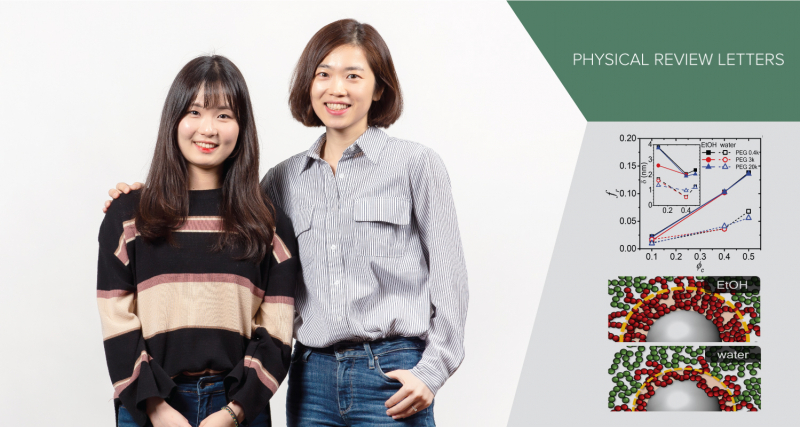 From left are Sol Mi Oh and Professor So Youn Kim in the School of Energy and Chemical Engineering at UNIST.

Their findings have been published in Physical Review Letters on October 17, 2019.

The combination of nanoparticles and polymers within a material, allows the development of composite materials with desired properties. Plastics, made from polymers, are generally lightweight, yet tend to be brittle and easy to break. This limitation has been overcome by the addition of nanoparticles to plastics and has resulted in the creation of plastic materials that are both strong and lightweight. Such property enhancement is known to originate from the material used, yet it has been discovered that the process of manufacturing such materials also plays an important role.

A research team, led by Professor So Youn Kim in the School of Energy and Chemical Engineering at UNIST, has discovered that the initial dispersing solvent used in solution mixing method has a significant effect on the structure and the properties of the polymer nanocomposites (PNCs). Solution mixing is a technique for fabricating polymer nanocomposites, which involves dissolving polymers and nanoparticles in a suitable solvent and solvent evaporation to obtain the nanocomposites. In other words, depending on the initial solvent influences the resulting physical properties of PNCs.

Figure 1. (a) The calculated strongly immobilized polymer fractions as a function of øC in ethanol- and water-started PNCs with closed and open symbols, respectively. (b) Schematic illustrations of the nanoparticle surface in PNCs. Red and green chains are adsorbed and bulk polymers distinguished by the yellow dashed line.

In the study, the team noted that the initial dispersing solvent, which is not present after producing PNCs, drives these nonequilibrium effects on polymer chain dynamics at interfaces. Indeed, because the solvents quickly evaporate during the production of PNCs and thus are not present in the final state, the significantly different microstructures and dispersion states of the nanoparticles depending on the initial solvents suggest that an initial solvent-driven nonequilibrium effect is present, which could originate from different solvent–particle and solvent–polymer interactions in the initial dispersion states.

Besides, the team also composed PNCs with the same polymers and nanoparticles using either ethanol or water as casting solvents to determine whether the initial dispersing solvent may trigger substantial changes in the thickness of the immobilized layer. When the dispersing solvent is ethanol, a larger number of polymer segments is adsorbed (about 2 times higher), creating thicker immobilized layers (about 1nm thick) on the nanoparticle surfaces. 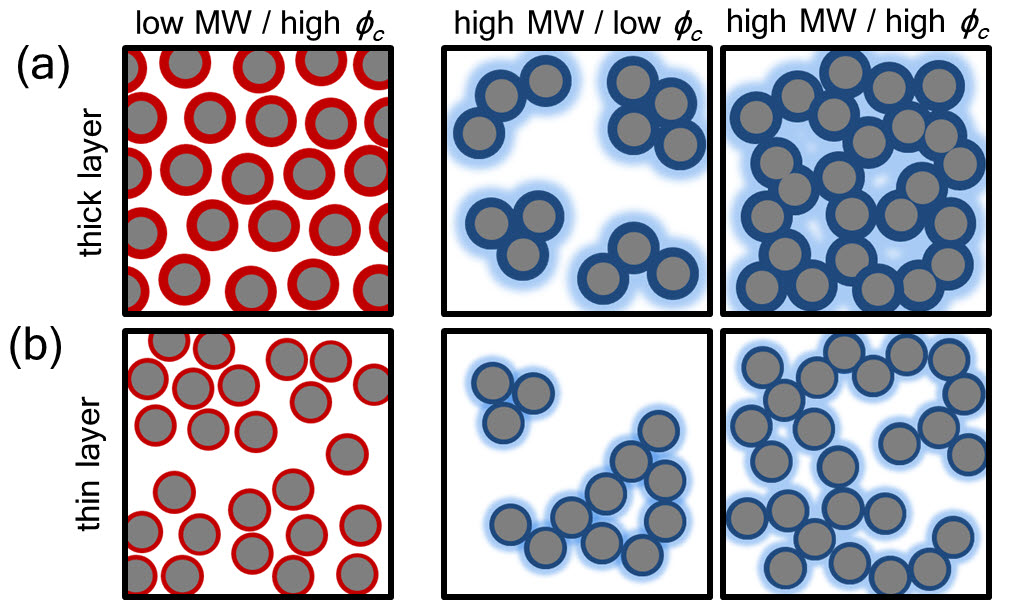 The research team noted that although solvent quality is well known to alter the interfacial properties of nanoparticles, creating thicker or thinner immobilized layers in polymer solutions, it is noteworthy that a solvent-driven nonequilibrium effect is present in PNCs even after thorough solvent evaporation. They also noted that the limited mobility of nanoparticles and polymers during solvent evaporation leads to kinetic trapping. The infinitesimal differences in immobilized layer thickness on a nanometer scale can thus change the final structure and rheological properties of PNCs substantially.

“Even with the same material and with the same volume, the properties of polymer nanocomposites will vary depending on the initial dispersing solvant,” says Professor Kim. “We emphasize that an in-depth understanding of nonequilibrium effects is both important and relevant, as are delicate variations in the chemistry or compositions in PNCs.”

The findings of this research have been published in the October 2019 issue of Physical Review Letters, the world’s premier physics letter journal. The study has been supported by the National Research Foundation (NRF) and the UNIST-PAL Beamline and has been participated by Professor Tae Joo Shin of UNIST Central Research Facilities (UCRF).