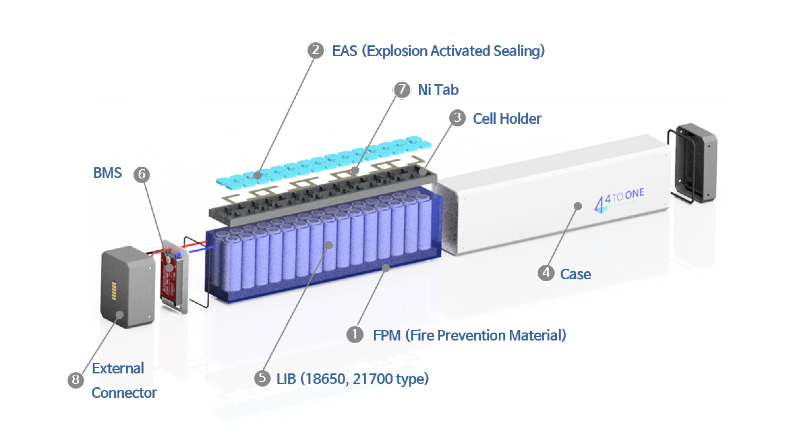 An online kick-off meeting for the development and demonstration of the WiB system took place on March 17, 2022.

An innovative idea was discussed to carry out empirical research on the Water-in-Battery (WiB) system, which works in an aqueous environment, containing fire extinguishing agents.

Professor Youngsik Kim (School of Energy and Chemical Engineering, UNIST), in collaboration with the Korea East-West Power Co., Ltd. (EWP), UNIST faculty startup ‘4 to One Co., Ltd.’, and Korea Testing Certification (KTC) held an online kick-off meeting for the development and demonstration of the WiB system on March 17, 2022.

Water-in-Battery (WiB) system utilizes water for functional elements in an existing battery to manage the generated heat and remove the fire-causing elements in the battery. Under general conditions, according to the research team, the system acts as a coolant and extends the battery life. Under abuse conditions, such as overcharging or overheating, the water in the WiB delays the thermal runaway of the battery. In addition, the system blocks fire by eliminating oxygen and decreasing the temperature of the battery. Moreover, this system can be simply implemented in an existing ESS by a low-cost and eco-friendly method.

Figure 1. Overview of the Water-in-Battery (WiB) system; (a) fire triangle with the three elements for the combustion and fire mechanism of LIBs; (b) schematic representation of the single lithium-ion battery cell structure and main components of the WiB; (c) fire blocking mechanism of the WiB.

During the meeting, cooperation measures were also discussed to accelerate the development and demonstration of the WiB system. The participating organizations will be working together to design, manufacture, construct, and demonstrate a 100kWh energy storage system (ESS), installed with the WiB. The aim of this project is to develop an ESS-based EV charging station that is fire-safe through a low-cost and eco-friendly method.

“We have been trying to find ways to solve the problem of fire from battery thermal runaway,” said Professor Kim. “The new system not only blocks fire by eliminating oxygen and decreasing the temperature of the battery but also can be simply implemented in an existing ESS by a low-cost and eco-friendly method.”

Professor Kim’s research team got the idea for the WiB during the development process of the seawater battery systems and specialized marine batteries, as part of the regional revitalization project and implemented it successfully.

The research team also succeeded in demonstrating the system’s fire and explosion blocking ability, utilizing their own ESS module. The results of the thermal runaway test for the WiB ESS module, provided by KTL showed no fire nor propagation of fires. The research team published their findings in an international journal and thus secured a number of original patents, related to the WiB.

Through this project, 4 to One Co., Ltd. will help manufacture the prototype for the WiB system, in collaboration with EWP. The company aims to launch their first commercial product in the second half of next year after a demonstration period of 1 year. Boasting source technologies, related to seawater batteries and WiB, the company has attracted much attention as a promising company in the energy field, such as being selected as a ‘National Representative Innovative Company 1000’.

Meanwhile, the meeting has been participated by key officials from EWP, UNIST Seawater Resources Technology Research Center, 4 to One Co., Ltd., and KTC.