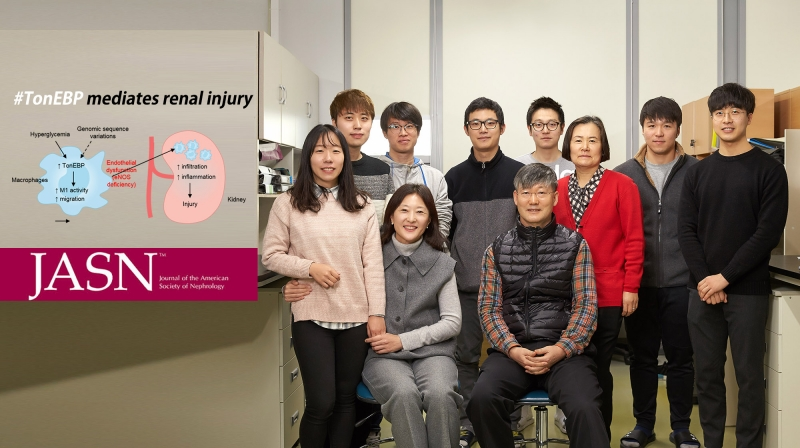 Their work has been published in the February 2018 issue of Journal of American Society of Nephrology.

Diabetes is like a slow-growing cancerous tumor. When left untreated, it can lead to a host of dangerous complications—including cardiovascular disease, kidney disease, neuropathy, blindness, and lower-extremity amputation. Diabetic Nephropathy (DN), also known as diabetic kidney disease, is a complication of diabetes that is caused by uncontrolled high blood sugar. Unlike other forms of diabetes, an effective and fundamental cure for DN still remains elusive.

In search for new therapeutic treatments for DN, the research team, led by Professor Hyug Moo Kwon in the School of Life Sciences at UNIST has identified a new and pivotal player in diabetic kidney disease. The findings of this study have been published in the February 2018 issue of Journal of American Society of Nephrology. 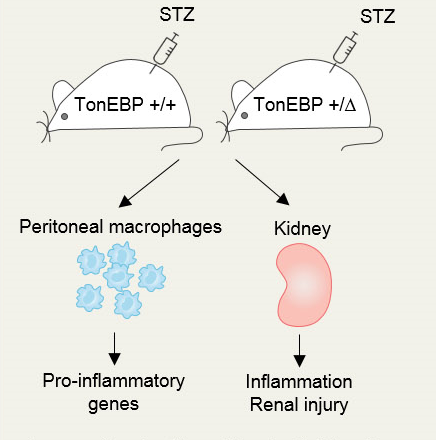 The research team previously reported that increased activity of tonicity-responsive enhancer-binding protein (TonEBP) in monocytes was associated with early DN and progressive chronic kidney disease (CKD) in humans. In this study, they extend those findings by testing the hypotheses and discovered that TonEBP genetic variability in humans is associated with inflammatory, renal, and vascular function–related phenotypes. Their findings suggest that TonEBP is a promising target for minimizing diabetes- and stress-induced inflammation and renovascular injury.

“Patients, suffering from end-stage renal disease (ESRD) are associated with increased mortality, unless treated with dialysis or transplantation,” says Professor Kwon. “The problem is that there is no cure for DN, the most common single cause of ESRD, and it has been impossible to predict early in the early onset of diabetes.” 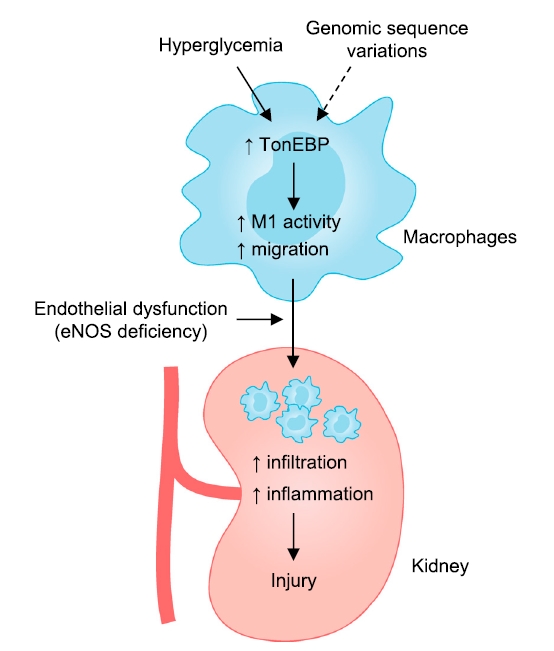 In the study, Professor Kwon and his research team looked at what are the early signs of kidney disease in patients with diabetes. The research team examined pro-inflammatory activation and renal injury in wild-type and TonEBP haplo-deficient diabetic nephropathy mice. After conducting detailed studies in a mouse model of ND, they discovered that TonEBP haplo-deficiency attenuates inflammatory gene expression and cell migration, leading to milder inflammation and renal injury due to reduced infiltrating macrophages.

The research team also performed a look-up of TonEBP varient, associated with a highly homogeneous cohort of healthy individuals with minimal confounders with measures of inflammation and renal function. While working with researchers at University of Maryland School of Medicine and Geriatrics Research and Education Clinical Center, the research team observed TonEBP-associated single nucleotide polymorphisms (SNPs) are associated with inflammation and renal function in humans. Their animal-based findings, along with consistent SNP-based association in related phenotypes in humans suggest that genetic variability in TonEBP leads to differential susceptibility to inflammatory responses, vascular injury, and CKD, in response to stressors such as hyperglycemia.

“All our findings suggest that TonEBP is an attractive target for minimizing diabetes- and stress-induced inflammation and renovascular injury,” says Professor Kwon.

This work has been supported by theNational Research Foundation grants and Health Technology Research and Development Project grant of Korea, and UNIST.