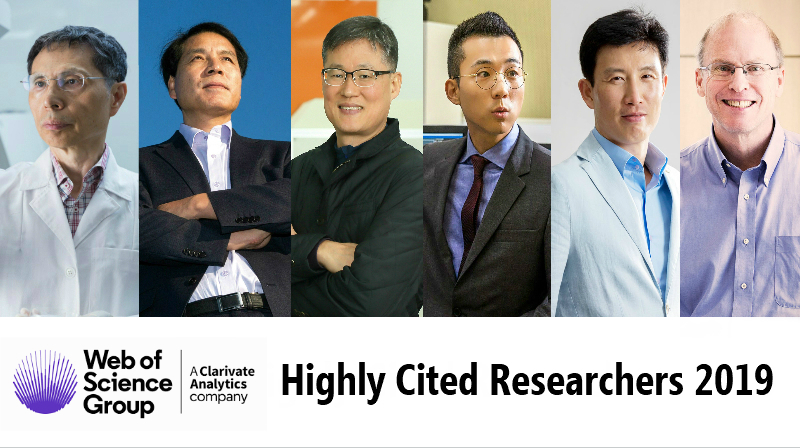 Six UNIST researchers have distinguished themselves with inclusion in the the prestigious Clarivate Analytics list of ‘Highly Cited Researchers’ for 2019. The annual list, published on November 20, includes researchers with multiple papers ranking in the top 1% by citations for their field and publication year.

This year, about 41 researchers in South Korea named to 2019 ‘Highly Cited Researchers’ list, which includes 6 faculty members from UNIST. This was the second highest number after Seoul National University that boasts 8 HCRs. In particular, one out of three HCRs named in more than two research fields are affiliated with UNIST. Considering the overlaps, UNIST, along with Seoul National University, hold the highest number of HCRs in South Korea, with 9 and 7 authors, respectively. 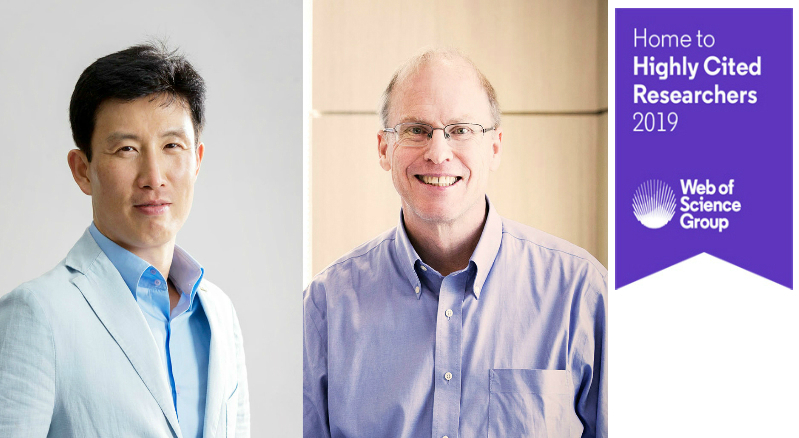 Researchers named to 2019 Highly Cited Researchers List in the field of Materials Science are: Rodney S. Ruoff and Jaephil Cho. Professor Ruoff has been also named as one of the world’s most influential minds in Chemistry. l Photo Credit: Ahn Hong Bum and Kyoungchae Kim

Rodney S. Ruoff, Director of the Center for Multidimensional Carbon Materials (CMCM) at the Institute for Basic Science (IBS) and Distinguished Professor in the School of Natural Science at UNIST, has once again been named as one of the world’s most influential minds in both fields of materials science and chemistry for six consecutive years. Besides, he proved his research impact by being named to all three fields of materials science, chemistry, and physics. Very few researchers earn this distinction and Professor Ruoff has been named four times, having done so previously in 2015, 2016, 2017, and 2018.

Jaephil Cho, Director of Research Center for Innovative Battery Technologies and Distinguished Professor in the School of Energy and Chemical Engineering, is known as the world leading expert on secondary batteries. Professor Cho has been named to 2019 Highly Cited Researchers List in materials science and this is the fourth time he has been named to the list. 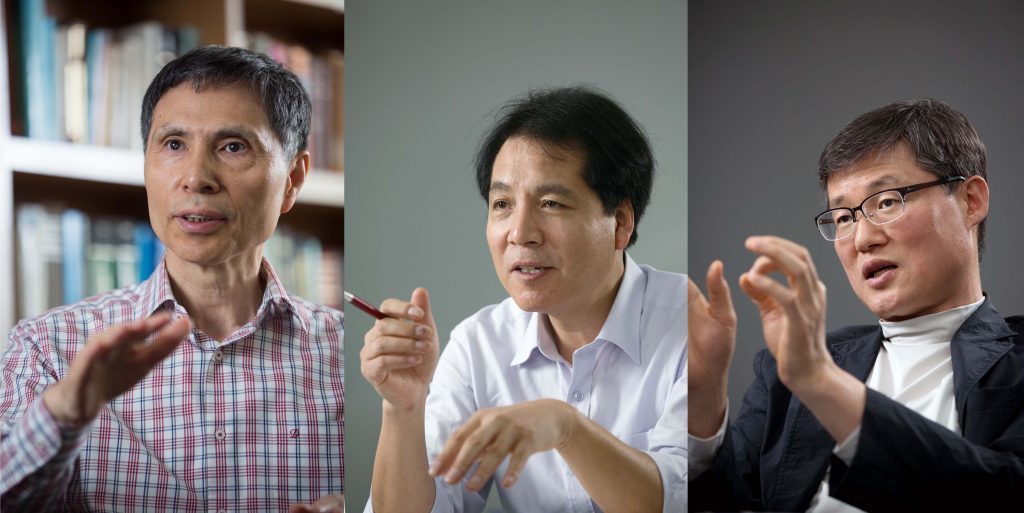 Kwang Soo Kim, Distinguished Professor of chemistry, Adjunct Professor in physics, and Director of the Center for Superfunctional Materials of UNIST, is also a National Honor Scientist of Korea. His current research interests include the areas of Theoretical and Computational Chemistry, Physics, and Experimental Nanosciences. Sang Il Seok, Distinguished Professor in the School of Natural Science at UNIST, is a master of fusion research. His achievements in the field of hybrid solar cells that use both inorganic and organic components, are unequaled. Particularly, his achievements in contributing to the production of perovskite solar cells with enhanced performance has been recognized worldwide. Professor Seok has begun to challenge the perovskite solar cell commercialization through his newly-launched UNIST-based venture company, Frontier Energy Solution Co., Ltd. Jong-Beom Baek, Director of Low-Dimensional Carbon Materials Center and Professor in the school of Energy and Chemical Engineering at UNIST, has been actively involved in a range of studies relating to carbon materials, materials science, electrochemistry, and organic synthesis. Professor Baek has also been carrying out collaborative research projects to help advance and commercialize their new water-splitting catalyst, [email protected]₂N. 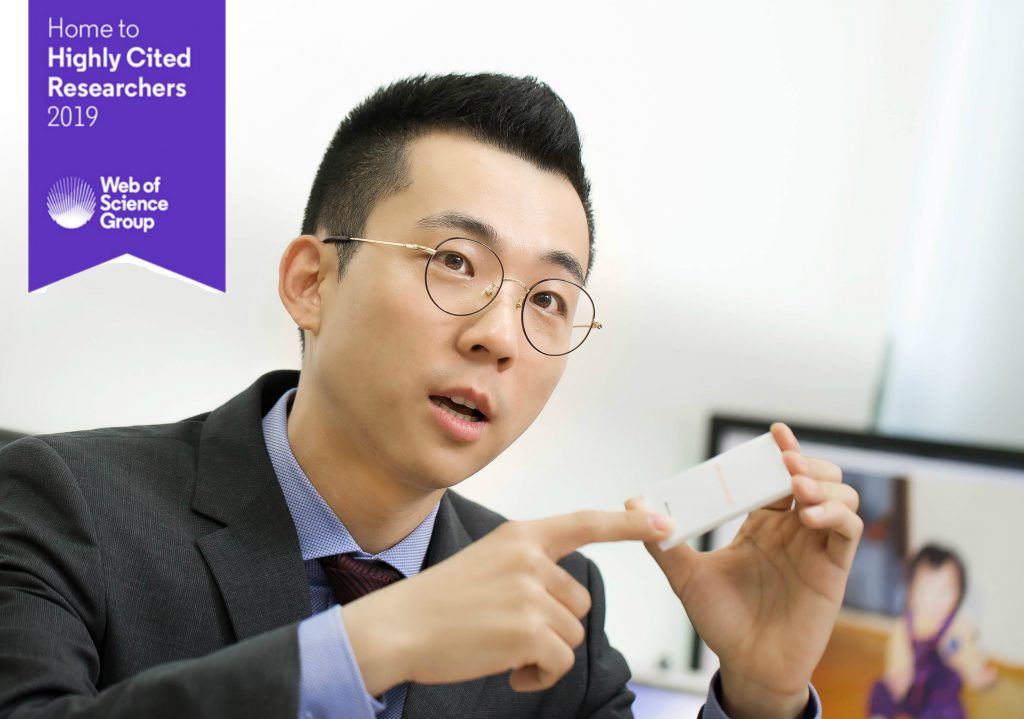 Hyun-Wook Lee, a professor in the school of Energy and Chemical Engineering at UNIST, has been also ranked in the top 1% Highly Cited Researchers in the category of cross-field. Besides, this year is the first time Professor Lee made this list. Professor Lee is a leading expert in the area of in-situ transmission electron microscopy (TEM). His current research interests include rechargeable batteries, synthesis of nanosized materials, and in situ/operando TEM studies.

The 2019 list is based on the number of citations for papers published over an 11-year period from January 2008 to December 2018. Highly Cited Papers are defined as those that ranked among the top 1% most cited for their subject field and year of publication, earning them the mark of exceptional impact. The yearly list contains 3,700 scientists from around the world and 21 distinct research fields, as well as an additional 2,500 scientists in the newly established category, Cross-Field.

According to Clarivate Analytics, the United States is home to the highest number of HCRs, with 2,737 authors. Harvard University, in particular, produced 203 HCRs, making it the world’s largest producer of HCRs, this year. China (mainland) surpassed the United Kingdom for the first time this year and became the world’s second-largest HCR emitter, after the United States. China’s HCR has increased by 32%, compared to last year.

The full Highly Cited Researchers 2019 list and executive summary can be found HERE. 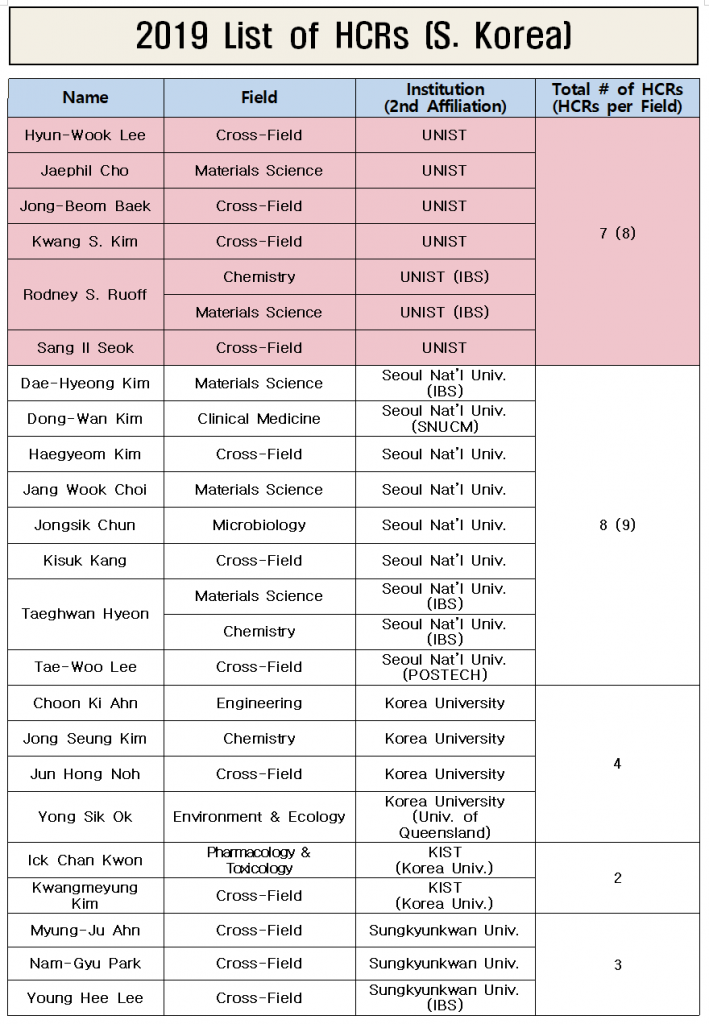 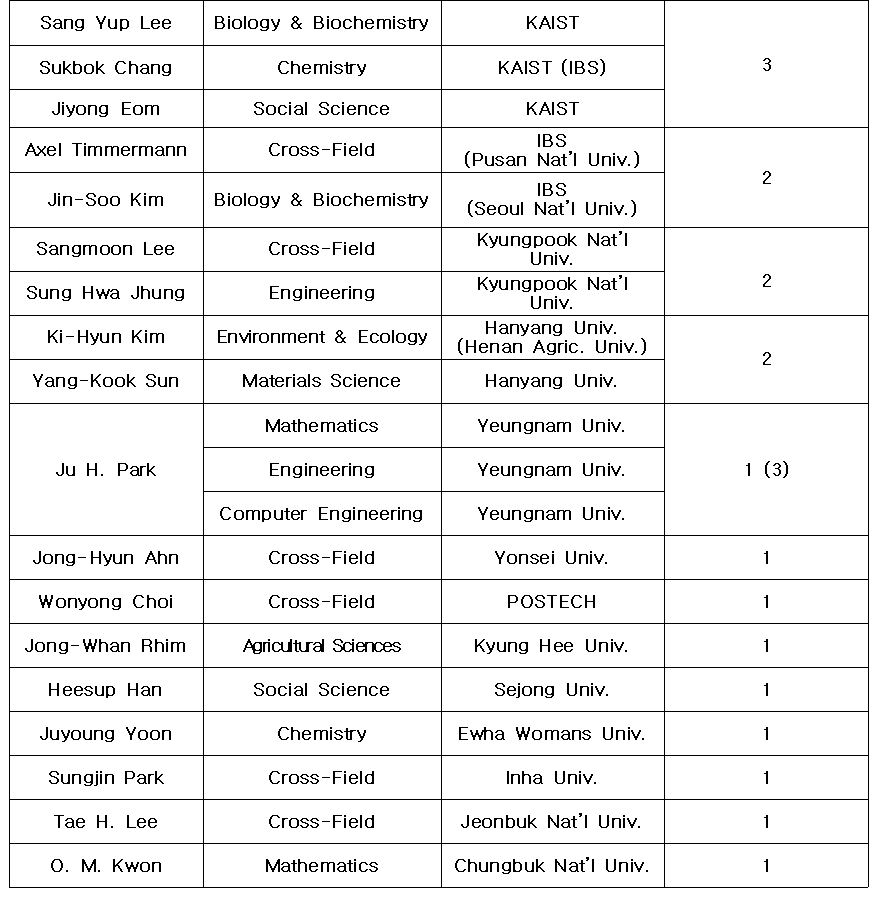