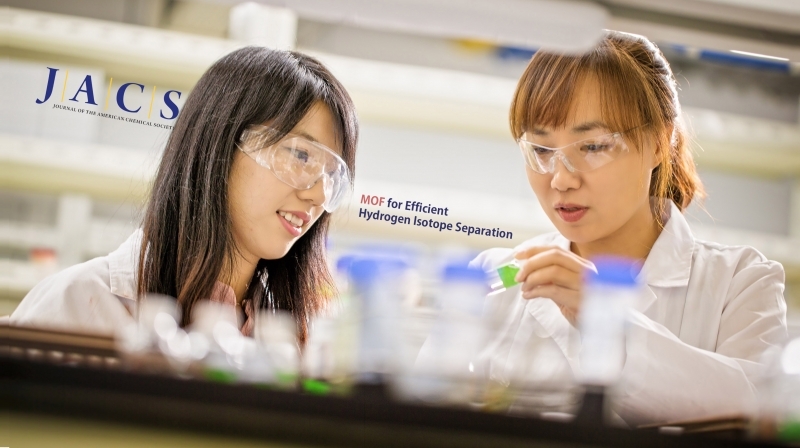 Their work has been selected to appear on the cover of the October 2017 issue of JACS.

An international team of researchers, affiliated with UNIST has presented a novel hydrogen isotope separation system based on a porous metal organic framework (MOF). The isolation of deuterium from a physico-chemically almost identical isotopic mixture has been a seminal challenge in modern separation technology. This MOF system, meanwhile, could efficiently separate and store deuterium inside the pores, exhibiting the highest selectivity of any system to date.

This breakthrough has been led by Professor Hoi Ri Moon in the School of Natural Science at UNIST, Professor Hyunchul Oh of Gyeongnam National University of Science and Technology (GNTECH) and Dr. Michael Hirscher of Max Planck Institute for Intelligent Systems (MPI). In addition, their work was featured on the cover of the October 2017 issue of the Journal of the American Chemical Society (JACS). 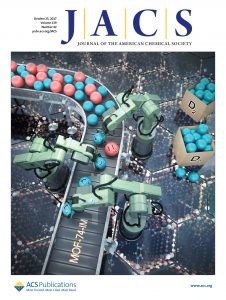 Professor Moon’s work has been selected to appear on the cover of the October 2017 issue of JACS.

In the study, the research team has reported a highly effective hydrogen isotope separation system based on porous metal−organic frameworks (MOFs) through a simple post-modification strategy. In addition, they also demonstrated that deuterium could be efficiently separated and stored inside the pores of the MOF-74-IM system by implementing two quantum-sieving effects in one system.

Deuterium (chemical symbol D or ²H) is a stable isotope of hydrogen with a nucleus containing one neutron and one proton. It is an irreplaceable raw material, widely employed in industrial and scientific research applications, ranging from isotope tracing to neutron scattering, as well as nuclear fusion. Besides being naturally present in very small amounts, deuterium constitutes 0.016% of total hydrogen occurring in nature.

In most cases, the desired degree of deuterium can be achieved by isolating deuterium from the isotopic mixture of hydrogen. However, because isotopes have similar physical and chemical properties, the process of filtering deuterium out of the natural isotopic mixture of hydrogen is at present both difficult and expensive. To solve this issue, scientists have designed a new MOF structure they hope could lead to new scientific tool that will selectively filter out deuterium, using the so-called “quantum sieving effect”.

“You may think of the quantum sieving effect, as the method of separating deuterium and hydrogen from each other based on their quantum differences via a quantum sieve,” says Jin Yeong Kim in the Combined M.S/Ph.D of Natural Science, the first author of the study. “It is like seperating rice from a mixture of rice with millet, using a sieve, according to their size.” 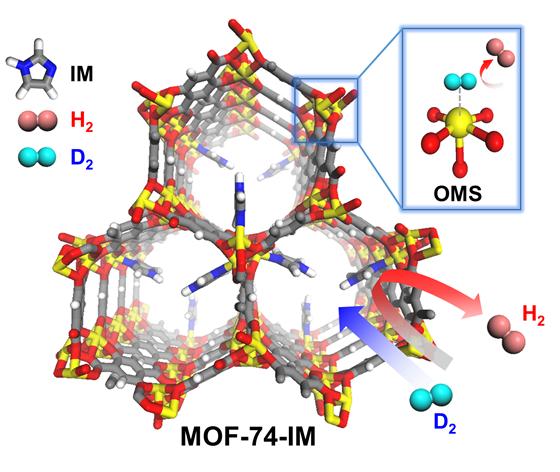 There are two kinds of quantum sieving effects for the separation of deuterium to date, kinetic quantum sieving (KQS) and chemical affinity quantum sieving (CAQS). In the study, Professor Moon and her research team have suggested a new strategy of combining KQS and CAQS in one system to separate isotopic mixtures, thereby creating a synergistic effect.

Furthermore, this smart material system could only be tested experimentally because the research team, headed by Michael Hirscher, had designed an apparatus in which they can analyse the stored quantities of different isotope gases directly with the aid of a mass spectrometer at cryogenic conditions. Their newly-developed system has never been proposed, and thus, attracted much attention as the first technology that both KQS and CAQS effects take place simultaneously.

For that purpose, they chose the porous MOF-74-Ni, having high hydrogen adsorption enthalpies due to strong open metal sites, for CAQS functionality. Simultaneously, imidazole molecules (IM) were employed into the MOF-74-Ni channel as a diffusion barrier, effectively reducing the aperture size and repeatedly blocking H2 diffusion, resulting in the KQS effect. Therefore, deuterium could be diffused into the controlled pore channel faster than hydrogen, and preferentially bound to the strong binding sites of Ni2+ open metal sites. As an result, the separation factor exhibited ca. 26 (26 deuterium molecules separated per one hydrogen molecules) at 77 K.

“The selectivity of 26 is far superior to any previous systems with a maximum of 6 under the identical condition” says Hyunchul Oh, the corresponding author of the paper. He adds, “At 77 K, the separating process can be exploited with liquid nitrogen, which makes it more cost-effective than cryogenic distillation method operated with liquid helium at near 20 K,”

“Although the idea of separating deuterium using quantum sieving effects already exists, this work is not only the first attempt to implement two quantum sieving effects, KQS and CAQS, in one system, but also provides experimental validation of the utility of this system for practical industrial usage by isolating high-purity D2 through direct selective separation studies using 1:1 D2/H2 mixtures.” says Professor Moon, the corresponding author of the paper. She adds, “We anticipate that this strategy can provide new opportunities for the intelligent design of porous materials leading to the development of other highly efficient isotope and gas sepration systems.”