Their work has been published in the prestigious journal, Advances Materials.

A piece of paper folded over many times able to carry more weight than a flat sheet of paper of the same length. Similarly, folding can also enhance the mechanical properties of graphene.

An international team of researchers, affiliated with UNIST has discovered that folding is an efficient strategy to incorporate large-area monolayer graphene films on polymer composites and that doing so improves mechanical reinforcement.

This breakthrough has been led by Distinguished Professor Rodney S. Ruoff and his research group from the Center for Multidimensional Carbon Materials (CMCM), within the Institute for Basic Science (IBS) at UNIST. Professor Nicola Pugno from University of Trento in Italy, and Professor Seunghwa Ryu and Dr. Stefano Signetti from KAIST, provided theory and modeling that complemented the experimental results from Professor Ruoff’s group.

The research group reported that they had succeeded in folding an A5-sized, 400 nanometer thick polycarbonate film in half 12 times. Their findings showed that this new approach using folding provides significant extra stiffening, strengthening, and toughening of the final composite piece incorporating the folded graphene.

“This work originated from my interest in folding. When Britney Gallivan was a high school student in California back in 2002, she demonstrated that a single piece of paper, about 1,200 meters in length, could be folded in half twelve times,” says Distinguished Professor Ruoff. “Before she succeeded that, it has been traditionally thought that the maximum number of times that paper or other materials can be folded in half was 7—including by the best mathematicians of the day.” 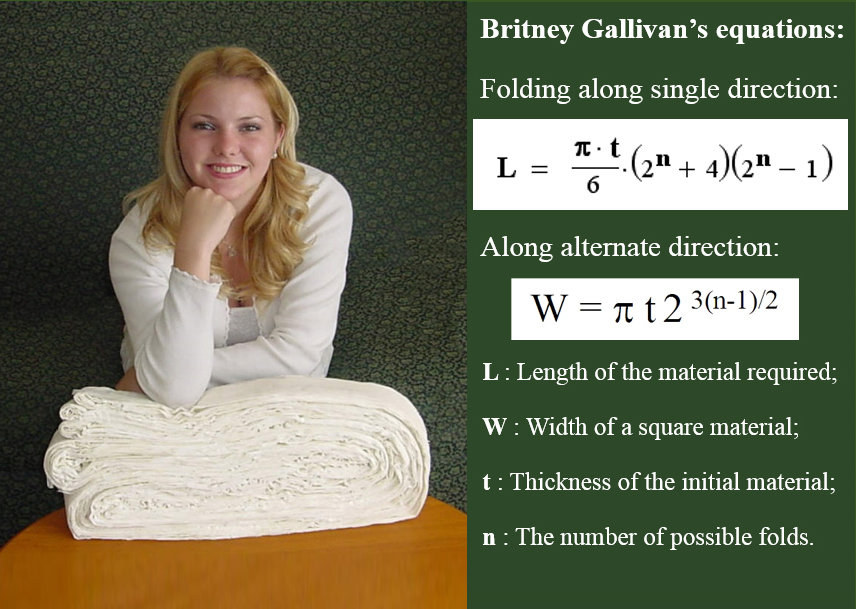 Britney Gallivan sitting on top of her gigantic piece of paper with 11 folds (left) and her equation (right).

“Professor Ruoff and I decided to try folding graphene, with a thin polymer layer attached to it, so that we could also try to achieve 12 folds but from a much smaller starting sheet of material,” says Dr. Bin Wang, an IBS Research Fellow and the first author of the study.

Using a water-air interface, Dr. Wang first folded an A5-sized, 400-nanometer thick polycarbonate film in half 12 times, yielding a millimeter-thick bulk material—an interesting accomplishment onto itself. He then ‘filled’ large area monolayer graphene film into the folded laminate by starting with an A5-sized 400-nanometer thick polycarbonate film but now coated with a single layer of A5-sized graphene that had been grown by chemical vapor deposition by Professor Haofei Shi and colleagues from Chongqing Institute of Green and Intelligent Technology in China.

“When pulled on, graphene is among the stiffest materials and if it can be made free of defects will be one of the strongest materials. Therefore, optimizing its incorporation in composites for reinforcement is an important scientific challenge,” says Distinguished Professor Ruoff. “Dr. Wang also folded this A5-sized bilayer sheet of polycarbonate and graphene 12 times, which means that there were 2^12, thus 4096 layers of graphene present in the final composite structure, that had lateral dimensions of about 3 mm x 2 mm with a thickness of ~3 mm.”

Larger length x width (that would also be thinner) samples of the final folded sample were needed for mechanical testing. Wang thus made a series of samples each with 10 folds (rather than 12), and used a ‘three-point bending test’ to study their mechanical response. With a remarkably low volume fraction of graphene of only 0.085% (less than 1 part in 1000), the Young’s modulus (intrinsic stiffness), strength (stress that the material breaks at), and toughness modulus (energy consumed in breaking the sample) were enhanced in the folded composite by an average of 73.5%, 73.2%, and 59.1%, respectively. From the graphene folds alone the Young’s modulus was increased by 24.2%, strength by 25.4%, and toughness modulus by 14.5%. Note that these values are lower bounds, from the team’s modeling. Thus a remarkable mechanical reinforcement from the combined folding and stacking of graphene was found. 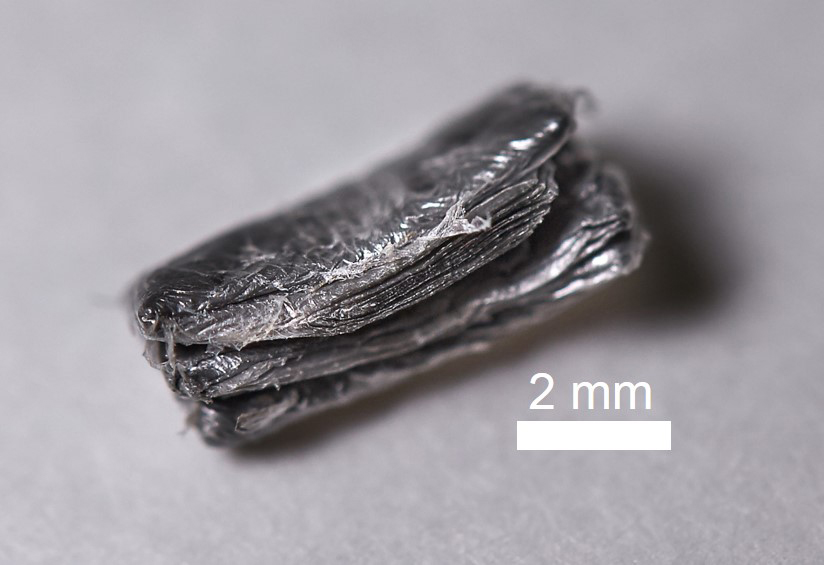 Above is the 11 folds graphene composite film sample and this can be folded one more time. l Photo Credit: Kyoungchae Kim

These experimental results have also been rationalized with theory combined with modeling provided by Professor Pugno’s group from University of Trento in Italy. “The fold plays a special role in stiffening and strengthening the composite,” says Professor Pugno. “The folded structure can sustain a larger bending force as compared with the analog of stacked but disconnected layers, which could be explained by the improved layer-layer interaction generated from the additional constraint(s) by the folds.”

Professor Ryu and Dr. Stefano Signetti from KAIST who provided the theory used finite element modeling (FEM) to simulate the bending of the folded laminates and discovered that the folded configuration provides much higher bending stiffness with respect to the stacked configuration with the equivalent 1024 layers of embedded graphene. “The additional constraint given by the folds results in both higher specific deformation energy stored in the composite plate, and also higher bending force at the same imposed displacement as compared with the plate with the same number of stacked layers but without the folds,” says Dr. Signetti, a postdoctoral fellow from KAIST.

“The models presented in this work could be helpful for the design of other kinds of two dimensional materials embedded in multilayered three dimensional composites, which can be realized at large size,” says Distinguished Professor Ruoff. “Besides the mechanical reinforcement, there are other potential applications of the folded laminates.”

Dr. Wang further noted that “By combining various two dimensional nanomaterials that contribute special functionality, folding can be used to obtain macro-scale materials for many other potential applications, including but not limited to energy storage and conversion, and thermal management.”

This research was supported by the Institute for Basic Science and has been published online in the journal Advanced Materials on July 11, 2018.